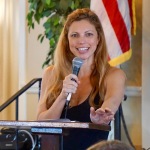 Merrin was elected president of the club in 2019, after serving as VP since 2017.  An experienced teacher, tutor, and freelance writer, Merrin felt compelled to become more involved in politics immediately following the 2016 election.  She ran and was elected as a delegate to the California Democratic Party, where she represented the 78th Assembly District at the State Convention in 2018. She is a proud resident of Ocean Beach, an ocean swimmer and yoga practitioner, and the mother of two toddlers.  She currently teaches a rigorous writing and rhetorical analysis course for high school students preparing for college entrance exams. 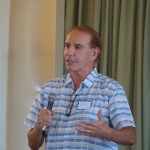 David was elected Treasurer in 2018 and has been a resident of Point Loma for over 20 years. His first remembrance of Democratic campaigns was when, in junior high school in New England, he sat at a Democratic booth, handing out fliers for LBJ  in 1964 (!).

Dave has an undergraduate degree in pharmacy, and a graduate degree in chemistry. Dave has held positions in FDA, large PhRMA companies as well as executive positions with local San Diego biotech enterprises.  More recently, he formed his own consulting company, providing regulatory services to the pharmaceutical industry.

Dave and his spouse Gary have been members of the club for many years. Dave wants to contribute an effort to the club, especially in light of the recent election results.