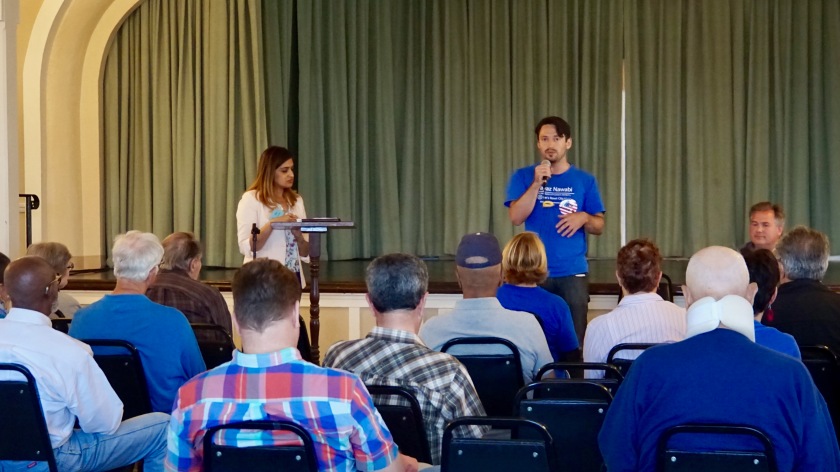 Merrin Muxlow, VP called the meeting to order at 4:15 PM.

After Tommy and Oren made opening statements, Dev conducted a Q & A using questions submitted by Club members. After closing statements were made, the candidate, paid and volunteer campaign staff, and family members were asked to leave the room and the floor was opened for discussion. Voting took place by ballot and Tommy Hough won the Club’s endorsement on the first round.

Superior Court
Dev said it was the first time the Club would be voting on an endorsement in a judicial race.

After Brower gave an opening statement, Dev conducted a Q & A using questions submitted by Club members. The candidate, paid and volunteer campaign staff, and family members were asked to leave the room and the floor was opened for discussion. Ruth Rollins made a motion that the Club endorses Matt Brower by acclamation (by a voice vote of “Oorah!” in recognition of Brower being a Judge Advocate in the Marine Corps Reserve), it was seconded, and the motion carried.

Vice President – Merrin expanded upon Susan’s announcement about the “Vote June 5”
PAC and urged members to go to their website, http://www.votejune5.org, and sign up to make calls. Treasurer – In Dave’s absence, Merrin reported the April 9 bank balance of and
pointed out that the Club had the money to give to local races.

Merrin thanked everyone for coming and invited all to meet afterwards at the Point Break Café. The meeting was adjourned at 5:55 PM.