CALL TO ORDER:  President Jonathan Wubbolding called the meeting to order at 4:20 PM.

Statements from candidates, elected officials or representatives not on the Agenda: 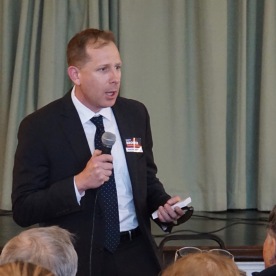 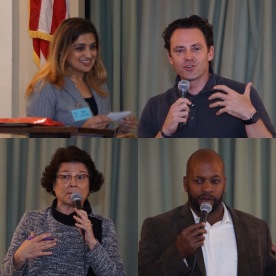 PROGRAM: ENDORSEMENT FORUM FOR SUPERVISOR DISTRICT 4
Endorsement Committee Chair Dev Zaveri-Tabb presided over the forum.  She explained the Club’s endorsement procedure and then gave each candidate three minutes to make an opening statement, in an order determined by a drawing:

After the statements were made, Dev conducted a Q & A session, using six questions that had been submitted by Club members at the beginning of the meeting.  Afterwards, the candidates gave 3-minute closing statements.

Dev announced that the floor was to be opened for private discussion and asked that all candidates, their spokespersons, staff, and family step outside; however, any who were Club members were allowed to cast their ballots before exiting the room.

Dev asked whether anyone had any comments to make about any of the candidates, including Ken Malbrough.  A point of order was raised concerning Mr. Malbrough’s absence. Dev said that he had filled out an application that was subsequently approved by the committee, having met all of the general criteria; she said that he was expected to attend and that she didn’t know why he was absent.  She provided a summary of his candidacy and gave members an opportunity to see the results of his questionnaire.  After the discussion period, members were asked to cast their ballots and some Club business (listed below) was conducted while the votes were tabulated.

TREASURER – Dave Furlano reported the end-of-December and January bank balances.  He announced that the Club had hit the 200-member mark and reminded everyone that it was time to renew memberships.

CLUB OFFICER ELECTIONS
Ruth Rollins, Nominating Committee Chair, reported that the Club’s existing officers had stated they’d be willing to serve for another year.  She then asked if there were any nominations from the floor for the office of Club Secretary, hearing none, there was a motion to close the nominations, it was seconded, there was a call for discussion, hearing none, a voice vote was taken and Deborah Currier was reelected Club Secretary.

ANNOUNCEMENTS
Derek Casady, president of the La Jolla Democratic Club, asked the Club to consider passing a resolution saying that it supported the concept of a WWII-scale mobilization to get off fossil fuels.

Merrin Muxlow spoke about the just concluded CADEM State Convention that was held in San Diego. She said that the big news was that there were a lot of undecideds, with no endorsements given in many races. She also announced that a fundraiser was to be held March 15 for the Club’s endorsed candidate for the Club’s city council district, Jordan Beane.

Mike McQuary spoke about being the former president of the California Democratic Council and announced that Hilary Crosby had been elected the new president for the CDC at the state convention.  He also spoke about his campaign for reelection to the SD Unified School Board District C.

Ruth Rollins announced that there was going to be a new website called “Blood On Their Hands” that will list all candidates who accept money from the NRA.  She suggested that gun manufacturers and other organizations of gun owners be added.

Susan Peinado announced that there were exactly 100 days till the Primaries.

ADJOURNMENT:  The meeting was adjourned at 6:13 PM.