Club President Jonathan Wubbolding called the meeting to order at 4:05 PM. He thanked everyone for coming and asked any new members to stand and introduce themselves. He then made a call for any elected officials or their representatives, former elected officials, or any candidates who wished to speak and the following responded:

Ed Harris, representative for the city lifeguards and former City Council member, gave an update on the controversy brewing between the Fire Chief and the Lifeguard Union. He said that the Fire Chief made a major change recently, without informing the lifeguards, about how emergency calls were dispatched. Now, when there is a need for an ocean rescue, 911 calls are sent to Police Dispatch, then to Fire Dispatch, before finally being sent to Lifeguard Dispatch, causing a lot confusion and life-threatening delays.

Omar Passons, a land use/construction attorney, said he was a candidate for County Supervisor, District 4, primarily because he wanted every child in every community to have a strong start in life and because he was concerned about the problem of homelessness and how it was crippling the senior population. More information can be found at www.omarpassons.com.

Jordan Beane, candidate for City Council District 2, spoke about yesterday’s Earth Day rally and said it was disheartening that we need to stand up and fight for facts. He said it was time for new leadership in District 2 and that people can go to www.jordanbeane.com for more details.

Bryan Pease, a public interest attorney focusing on government transparency and accountability, spoke about his candidacy for City Council District 2; he asked people to go to www.bryanpease.com for more information.

Lori Saldaña, who served in the State Legislature for six years, spoke about April 26 being designated Denim Day to call attention to serious issues in our society regarding rape and sexual assault. She also said that April was Sexual Assault Awareness Month and that this year’s theme was “Engaging New Voices.” She spoke about how people can raise their voices on the issue and work for change, and pointed out that there are a lot of misconceptions about what constitutes sexual assault and violent crimes.

Denim Day Resolution: Saldaña asked the Club to pass a resolution in support of Denim Day and demand a clearing of the backlog of DNA evidence kits. Anne Hoiberg made the motion for the Club to write the demands in a letter to the San Diego City Council, it was seconded, the motion carried and passed unanimously.

Assemblywoman Lorena Gonzalez Fletcher spoke about her recently introduced legislation. AB 1312 – Sexual Assault Survivor Bill of Rights, currently in Assembly Appropriations, would insure that rape kits were not destroyed prematurely and were processed within a certain period of time; right now, evidence can be destroyed after two years. She displayed a chart showing that San Diego had a backlog of 2,873 unprocessed rape kits, compared to New York City and Los Angeles having none. She has also coauthored legislation that would make rape a violent felony if the victim was unconscious.

Gonzalez Fletcher then spoke about the county’s transportation problems. She explained that the local transit operators, SANDAG and MTS, were charged with spending all transportation money, yet SANDAG’s board was made up of people from ten cities that represent only 12% of the area’s population; as it stands, the mayor of Del Mar, a city of only 4,000 people, would be in charge of transportation for millions of people in San Diego. To address the injustice, she introduced AB 805 to reform how the region spends and tracks transportation funding and redo the board so that members would be in proportion to the population.

She also spoke about other issues, such as the border wall, and assured everyone that she was fighting the Trump agenda every step of the way and urged everyone to keep up the fight. Next, she introduced her husband, Nathan Fletcher, the Club’s featured speaker. 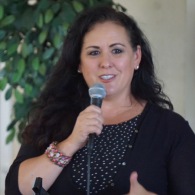 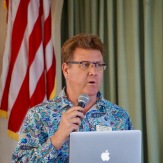 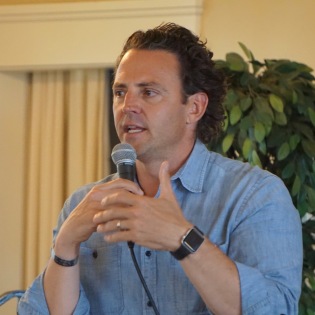 Program: Nathan Fletcher – Voting Rights
Nathan Fletcher, a UC San Diego political science professor and former State assemblyman, praised his wife as being that rare individual willing to take on powerful interests and fight for those without power, citing her successes in getting paid sick leave for hourly workers and overtime pay for farm workers, making California the first state to honor the work of everyone.

He then paid special tribute to Jonathan, the Club’s president. He said that Jonathan was a veteran and part of today’s generation that has returned home from war and was now serving their communities. He said that though his military service had ended, his commitment to service and love of country had not and that it was great to see him leading the Club and driving an agenda.

Fletcher went on to speak about the frustration veterans feel when they see the Right hijacking the progressive agenda and their respective values. He explained that the military has always been ahead of its time and has an amazingly progressive story to tell. For example, it was

racially integrated 16 years before the Civil Rights Act, has a single-payer government-funded health care system that works, and considers climate change to not just be an environmental issue but also a moral and national security issue.

He then spoke about the deportation of veterans and how he was incredulous when he heard it was happening. He’d thought that veterans were citizens and could not be deported, that they’d been told from the beginning that if they were willing to die for the country and take the oath of enlistment, which is almost verbatim the oath of naturalization, that they would become citizens. However, he learned that for the past 50 years, the government had been systematically failing to fulfill its promise. He explained that like any segment of the population, or sometimes as a result of PTSD or other issues faced while serving, some veterans go astray and commit offenses, but that a grateful and compassionate nation should offer a path to redemption and rehabilitation, not a path to deportation.

He has worked with friends at the ACLU to advocate, help raise awareness, and drive change. They formed a coalition and got legislation introduced in Sacramento and D.C., and everything was looking great until Trump happened. They then had to become creative and took the approach of wondering, “What if the crime goes away?” and started lobbying Gov. Brown to issue pardons, which had never been done before based on a deportation process. The Governor eventually pardoned three veterans, however, there were 307 others who need help and Fletcher urged people to go to http://www.deportedvets.org to sign a petition and join their effort.

Next, Fletcher related a conversation he witnessed when serving on the national advisory board of Obama’s Organizing for Action project. At one of the meetings, President Obama was asked, “What if Congress said it would pass just one piece of legislation for you, just one time—what would it be?” Obama replied that he’d never been asked that and had never even thought about it because it was so detached from reality. After some thought, he said “Compulsory Voting”, because he believed if the country had that, everything else would take care of itself. The answer inspired Fletcher to create a new university class devoted entirely to the Voting Rights Act of 1965. He said if people can’t access the ballot, no amount of persuasion can help; because the GOP can’t win an election based on ideas, they have to keep people from voting.

Fletcher explained that although the 15th Amendment, ratified in 1870, said that the right to vote shall not be denied on the basis of race, some states required “certain people” to take a literacy test designed to be impossible to pass (Fletcher noted that none of his college students have been able to). The Department of Justice was then established to enforce voting rights in the South and progress was made until President Hayes was persuaded to “restore home rule” and removed the Federal troops. Progress began again in the 1900’s, most notably with the Civil Rights Act of 1964 and the Voting Rights Act of 1965; however, in 2013, a huge setback occurred when the Supreme Court ruled that voter protection was no longer needed.

At the conclusion of his talk, Fletcher encouraged everyone to include the issues of voter’s rights and voter participation when working for change at every level of government.

Club Reports
President – Jonathan Wubbolding, as an aside, said that he, too, had taken the literacy test Fletcher had spoken about and reiterated that no one could pass it.

Treasurer – Jonathan announced that the Club was in need of a new treasurer because Thena Taylor had resigned.

Jonathan thanked everyone for coming and invited all to meet afterwards at the Point Break Café at 2743 Shelter Island Drive to continue discussion.

The meeting was adjourned at 5:23 PM.