Club President Susan Peinado called the meeting to order at 4:02 PM. Susan thanked everyone for coming and asked all Club members who joined that day to stand and be recognized. She then introduced the following people who wished to speak: 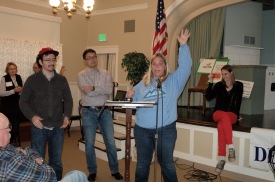 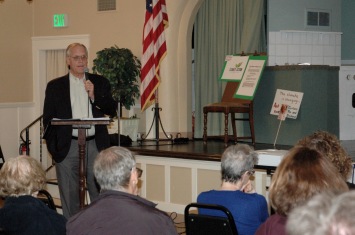 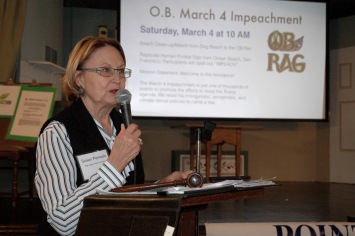 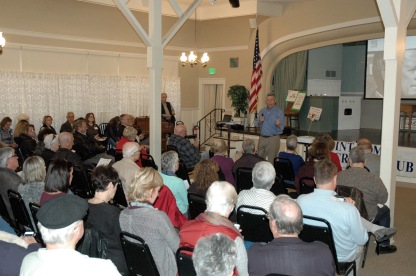 Dave Myers, candidate for Sheriff of San Diego County, said that when he started working in the department 22 years ago, his model was to police and respond to calls for help as if his mother was calling. He complained that they’ve gotten away from that today and treat marginalized communities differently.

James McCord, a volunteer with California Clean Money Campaign, spoke about AB 14, the Disclosure Act, that’d require political ads to clearly show their top funders. He urged people to sign his petition and visit their website, www.YesFairElections.org. Later, Susan responded to his request that the Club endorse AB 14 by entertaining a motion that we consider endorsing at the next meeting; the motion was made, seconded, and it passed.

Chris Dalton, a former USMC helicopter pilot, said he was considering getting into the race to unseat U.S. Rep. Duncan Hunter, CA-50. He said that unlike Hunter, he believed the purpose of government was to secure the rights of every American.

Jordan Beane, a candidate for City Council District 2, spoke about giving up his decade-long career in sports to run for a more progressive San Diego and about the importance of defeating Lorie Zapf and gaining a 6:3 Democratic supermajority.

Leaders from area Indivisible groups spoke next. Kathy Stadler said their main goal was to “Flip Congress 2017” and that more info was available at http://www.indivisibleGuide.com; Mike Sakasegawa said they’re all about consistent engagement with members of Congress and a great way to get one’s voice heard; Pam Hughes spoke about the group Truth Not Tweets; Becca Taylor urged people to go to “Invisible San Diego CD52” on Facebook and join a group.

Todd Gloria, Assemblymember for 78 AD, gave an overview of his first 83 days in office, saying he was selected as an assistant whip and assigned to the Parks & Wildlife, Education, Government Organization, Veteran’s Affairs, and Aging Community committees. He’s introduced AB 187 – The Disclosure Act, to increase transparency in local elections, and a bill to update HIV discrimination laws.

Q&A: Todd expressed support for SB 54 – California Values Act, saying the state won’t be complicit in mass deportation. Susan responded to his request that the Club endorse AB 187 by entertaining a motion that we consider endorsing at the next meeting; the motion was made.

PROGRAM, Part 1: Political Climate – Doug Applegate on Taking the Hill
Col. Doug Applegate, candidate for the 49th Congressional District, spoke about the recent “Empty Chair Town Hall Meeting”, where Darrell Issa was a no-show, and about the prevalence of signs that simply said “1621”, how many votes Issa beat him by in 2016.

He talked about the importance of speaking to the veteran community, pointing out that the 49th has 45,000 veteran households. He said it’s not true that they’re all are Republicans but it is true that Marines will always vote for another Marine. He stressed that we have to make veteran’s healthcare, the single largest healthcare system in the country, work. Not only because it was promised but also because its success would prove that a single-payer system would be best for everyone.

When speaking about the use of the military, he said that you can’t kill your way out of the Middle East; that it doesn’t matter how much of a threat ISIS supposedly is because it’s actually a battle for the soul of Sunni Islam and Sunni Muslims have to fight it alone. We can help, but there can’t be boots on the ground. He added that Assad was the worst war criminal he’d ever seen and needs to be brought to trial.

He also complained that there were many things Democrats haven’t delivered on and that we need to wear our values on our sleeves and stop just calculating what’s going to bring in the most votes. He said the party hasn’t protected wages and American jobs for 40 years, but Trump made such promises (that he can’t keep), that resulted in a 70,000 vote edge and left our country with its greatest threat to democracy.

He said Democrats haven’t delivered to Hispanics, either; instead, we’ve just said we have to wait, resulting in a lower voter turnout. He added that the country has wrongly made Mexico the scapegoat of our problems, and that we now need to stand up for the Hispanic community. The issue is especially important to him because his three children are of Mexican heritage.

Q&A: Applegate said he’s against California succession, thinks the drug problem needs to be treated as a medical problem rather than a criminal one, and said we need to help the Hispanic community by telling them what their rights are, such as not having to respond should an officer come to their door without a search warrant. When someone expressed anger over the Party 2
not getting behind Bernie, Applegate said he was for Bernie during the primary, but was then with Her, saying it was important for Democrats to “win the bar fight.” When talking about partisanship, he compared Congress to bad parents in a divorce: the two parties refuse to “share custody of Americans” no matter how destructive it is. The GOP won’t even agree with their prior principles because it will hurt their brand: Trump.

He urged people to volunteer or contribute to his campaign at www.ApplegateForCongress.com

PROGRAM, Part 2: Political Climate – Carl Yaeckel from Citizens Climate Lobby
Carl Yaeckel, with the Citizens Climate Lobby (CCL), said global warming is not a controversy as far as science is concerned and that we’re in a lot of trouble — our time is running out and we must act very soon. Things won’t get better if we only cut back on burning fossil fuels; we have to completely stop using them before the end of the century.

He said the CCL is an advocacy organization made up of mostly volunteers and has 50,000 members worldwide. Their vision is to have a livable world; their mission is to create the political will for climate solutions; and, their strategy is to get Congress to pass a National Climate Policy.

The CCL is nonpartisan, nonprofit, and solution focused. They also believe in treating every member of Congress with respect, appreciation, and gratitude. To illustrate how this approach works, he said that Sen. James Inhofe, famous for mocking global warming with a snowball, told them that he doesn’t mind meeting with them because they don’t scream at him.

The massive opposition from the fossil fuel industry is rooted in the fact that there’s $100 trillion worth of fuel still in the ground available to be burned. Therefore, there’s a need to approach the subject in ways that appeal to conservatives, such as emphasizing the opportunities a climate plan would bring to American ingenuity, its free market effect and call for individual responsibility, and its enhancement of national security through energy freedom. The economy and the employment rate would be greater and, also, countless lives would be saved.

More information is available on their website, www.CitizensClimateLobby.org and Yaeckel can be reached at ayaeckel@gmail.com.

Q&A: When asked about Scott Pruitt, the EPA’s new director, he said the election was the nightmare they always feared would come; the administration will have no climate policy at all.

TREASURER: Jonathan Wubbolding reported a bank balance of $8,200 and said the Club just gained 8 new members and 9 renewals, which will raise it to $8700. He stated that no major bills were due this month. Susan added that the Club paid the $150 rent for an Indivisible 52 group meeting held earlier.

PRESIDENT: Susan Peinado gave her last report as Club President and said that she really enjoyed serving in that capacity for the past four years.

NEW BUSINESS: ELECTION OF CLUB OFFICERS
Ruth Rollins, Nominating Committee Chair, announced that Dev Zavari-Tabb had withdrawn as a candidate for Vice President, and that Merrin Muxlow, a new ADEM, had stepped in.

At the time each of the following officer candidates were announced, Ruth made three calls asking if there where any nominations from the floor and after hearing none, closed the nominations.

Susan thanked everyone for coming and invited all to meet afterwards at the Point Break Café at 2743 Shelter Island Drive.

ADJOURNMENT: The meeting was adjourned at 5:39 PM.