Club President Susan Peinado called the meeting to order at 4:01 PM. Susan thanked everyone for coming and all who brought snacks, then recognized new members Sandy and Jim Howland, Angela Hawkins and Tim Hanna.

Tim Hanna came forward to speak on behalf of Scott Peters, who’s running for reelection in CA52. Tim urged people to get involved in the campaign and described Peters’ new opponent as a former Carl Rove aide who worked in the second Bush administration and was anti-choice and anti-equality. 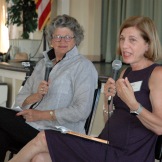 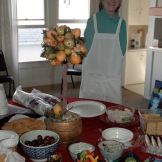 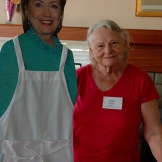 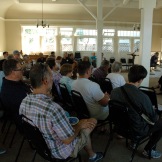 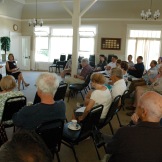 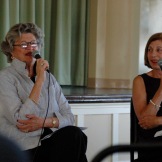 PROGRAM: Barbara Bry & Mary Walshok – The Evolution of San Diego’s Innovation Economy
Mary Walshok was introduced as an “Academic Entrepreneur”, who had developed many new programs at UCSD, including Connect, written over 100 articles and reports, and also books such as “Invention and Reinvention: The Evolution of San Diego’s Innovative Economy”. Her official title is Associate Vice Chancellor for Public Programs and Dean of Extension at UCSD, and her main focus is on how globalization and rapid changes in technology affect the social dynamics and economic challenges in America.

They described San Diego as a paradox in that it wants to be a green, world-class city but doesn’t want local taxes to pay for it. The city’s economy has long been based on feeding from the federal trough, but history has shown that the city has been resilient and adaptive and is now a great example of how a community reinvents itself.

At the height of the Industrial Revolution, the city’s isolating geographical features made it unattractive to businesses; however, because of its healthy environment and lifestyle, it became a destination for people with respiratory diseases and those in the middle class who wanted to escape large unclean, disease-ridden cities.

San Diego didn’t know how to build an economy until the Spanish-American War brought military spending. Just prior to WWII, the city mobilized to attract the U.S. Navy, which later established the Pacific Fleet’s home in the city. Aerospace, research and development, and communications contributed to further growth. FDR then designated San Diego as one of two federal cities and built roads, housing, and much of the city’s infrastructure. 60% of the city’s GDP became military and defense based.

After the war, defense spending changed and the City Council had the foresight to realize federal funding would shift to science and technology research. With the help of Roger Revelle and John J. Hopkins, they developed a land use strategy to attract new R & D facilities. The city gave land to the military and also dedicated the Torrey Pines Mesa area to light industry, R & D and to UCSD as a research facility site. Later, many of the new companies and institutions became world-renowned.

Defense contractors continued to thrive until the end of the Cold War brought huge cutbacks. By the late 80’s unemployment reached 10% and Time Magazine called San Diego “America’s Bust City”. During this period, Mary and Barbara helped found the UCSD Connect program to link high tech and biotech entrepreneurs with the resources needed for success, which helped the city grow its own companies.

Today, 50% of the city’s GDP comes from federal spending on the military, defense, and R & D. High-paying jobs from technical based entrepreneurial companies are also main drivers of the economy, unlike tourism. Much of the city’s economic growth originates from these companies because after experiencing success, they stay involved and develop new enterprises. The city’s culture of risk-takers, its outstanding intellectual capital, and knowledgeable service providers for startups attract investors from around the world.

Barbara said the city needs a new brand for itself, reflecting what it contributes to the world. It also needs to reevaluate where the money for promotion of the city should go; it currently concentrates on the Convention Center and Visitor’s Bureau, mainly helping hotels fill beds, when populating a city is the real need. They spoke against public spending on a new Charger’s stadium, and against building one downtown because that area would be better used for incubating the economy, has the potential of expanding to the south, and may become innovation’s next frontier, especially in software.

Questions from the audience led to discussions about our flawed immigration policy, military land use, and the need for affordable housing, a new airport, better public schools, more education opportunities, and an increase in support for museums.

The importance of electing a forward-looking City Council was stressed because of its huge impact on the economy. Barbara noted that no council member has ever had her background in entrepreneurship and innovative economics; and, that if elected, she’d have a conversation with the community about what kind of city it wants for future generations and how to create it.

A Podcast of the program is available on iTunes and Stitcher or you can listen here.

Vice President
Noting that Mike Johnson was at the national convention, Susan thanked everyone who helped at the OB Street Fair last month. She also cited the need for the Club to have a dedicated scheduler for next year’s event, and to have the 4:00 to 6:00pm slot filled by men capable of handling the rowdy crowd usually present at that time.

Treasurer
Jonathan Wubbolding stated the club’s current bank balance, detailed some expenses including the $100 yearly fee for the Club’s website and $400 for the Point Loma High School History Awards. He also reported that the Club was expecting to start spending money on ads for the Public Relations Plan currently in development.

Open Discussion
Susan opened the floor to members who expressed the following as needs: Support of Doug Applegate’s campaign to unseat Darrell Issa, a race designated by the county and the DNC as critical; schedule a pro and con discussion of the ballot initiatives in October; encourage more young people to become involved in the Club; designate a member to work with a faculty advisor at Point Loma Nazarene College to increase student participation; avoid ageism; and, focus more on local non-partisan issues.

Announcements
Janet Spiro said there’d be a party in support of Hillary in University City at 5004 Maynard St on Sunday, September 18.

Anne Hoiberg announced that the San Diego County Democratic Party would hold a Convention Watch Party on Thursday, July 28, 5:00 to 8:00, at the Fraternal Order of the Eagles, 3848 Centre St.

Susan thanked everyone for coming and invited all to meet afterwards at the Seaside Pho & Grill at 1005 Rosecrans St. (within walking distance), where a back room has been reserved for the group and Happy Hour extended until 6:30 PM.

The meeting was adjourned at 5:32 PM.