Notes from the May Meeting – Politics of Choice in San Diego, Why Planned Parenthood Matters

Club President Susan Peinado called the meeting to order at 4:00 PM. Susan thanked everyone for coming; thanked all who brought goodies, including the new Refreshment Chair.

Unusually there were no elected officials, candidates or spokespersons on behalf of a proposition, and therefore we moved straight into the main program. 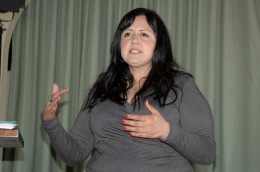 Politics of Choice in San Diego, Why Planned Parenthood Matters

Nora Vargas, Vice President of Community and Government Relations, Planned Parenthood Action Fund of the Pacific Southwest, reported that the chapter was the nation’s second largest, serving San Diego, Riverside, and Imperial counties and was the only one with a bi-national partnership (in Tijuana.) The chapter’s charitable arm has 19 healthcare centers and serves over 271,000 patients and gives over 66,000 healthcare lessons a year.

She said in addition to providing reproductive and healthcare services, PP cares for their clients holistically and advocates for issues such as the need for transportation, a raise in the minimum wage, paid sick leave, and for protection from abuse in the workplace. They also offer important services to pregnant patients under 18 who want to keep their babies and they seek to remove the “scarlet letter” often attached to those mothers.

Vargas spoke of the importance of this year’s election and outlined the extensive lengths conservatives have gone to to restrict women’s access to a broad range of services. She said that actual access to even basic healthcare for a large portion of our population was at stake, not just the survival of PP. To that end, its political arm seeks to educate the public and their representatives about the issues and also rates and endorses candidates in all levels of

government. She said they endorsed Hillary Clinton after studying the record and history of each candidate to determine which had done the most for women’s healthcare.

She also urged people to contact their state representatives and express support for the Confidential Communications Disclosure bill (AB 1671) that would protect the confidentiality of California doctors and educators and ensure the safety of PP healthcare providers and patients.

Delving into history, Vargas said a priest started the local chapter 25 years ago in Balboa Park after seeing the need for education and services; and, coincidentally, Jesuits at the University of San Francisco made her a feminist when she was a student there by continually telling her she could accomplish whatever she wanted.

There ‘s a podcast of the talk available here.

In Mike Johnson’s absence, Susan spoke about the critical need for volunteers to work in the club’s booth at the OB Street Fair, on Saturday, June 25. She stressed that it was an important community outreach opportunity in which the club could attract new members and register new voters. She urged members to commit to two-hour shifts on the sign-up sheet and also noted that Mike runs the county’s voter registration for new citizens and always needs volunteers for that also.

Susan Peinado praised the work being done by the Public Relations and Social Media Committees and expressed the need to keep reaching out to the community in order to give a home to like-minded people and grow the club.

She said there’d been an overwhelming response (40 – 50 people, including many non-club people) to the club’s Meet & Greet for Ed Harris on March 20 and urged people to continue to help with his campaign.

She reminded everyone that May 23 was the deadline to register to vote in the election, and that May 31 was the deadline for requesting a Vote by Mail ballot. She added that mail-in ballots were coming in at higher rates from Democrats, reversing past trends.

Susan encouraged frequent use of the information offered on the back of the Agenda Sheet and highlighted certain events:

David Warmoth, member of the Medical Board of California and immediate past president of San Diego Democrats for Equality, gave a public service announcement for the medical board. He said the purpose of the board was to protect the public by setting standards, licensing doctors, and disciplining when necessary. He urged people to go to http://www.mbc.ca.gov to file a complaint about a doctor or to check a doctor’s license, verify certifications, and see if any actions had been taken against them.

With time remaining before adjournment, Susan opened the floor for discussion of issues. Members voiced concerns about the City Attorney race and asked for guidance in voting for Central Committee candidates.

Susan thanked everyone for coming and invited them to meet afterwards at the Seaside Pho & Grill, 1005 Rosecrans St., noting that it was a change from the usual location, was in walking distance, and that the owner, Thuy (pronounced twee) Nguyen, had extended Happy Hour until 6:30 PM thanks to the efforts of our club member Scott Stevens.

The meeting was adjourned at 5:30 PM.