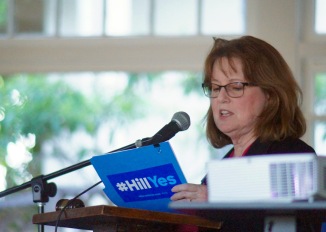 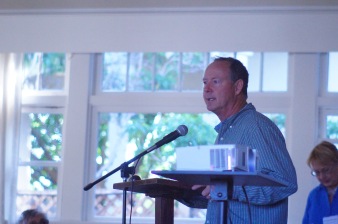 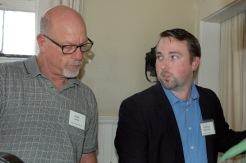 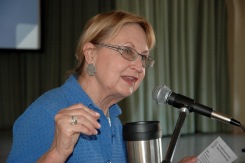 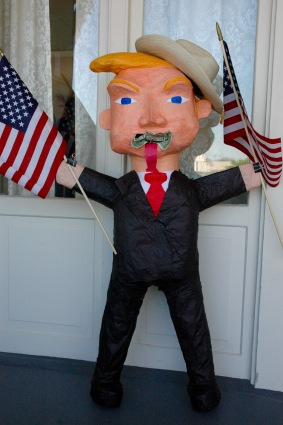 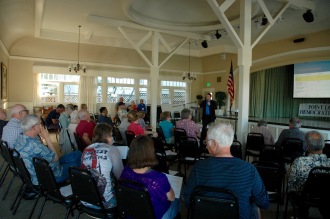 Reports
Vice President Mike Johnson called for members to help out at the OB Street Fair & Chili Cook-Off, to be held Saturday, June 25, 10 AM – 8 PM. About 10 volunteers were needed to work 2-hour stints. The club will be registering people to vote and trying to attract new members to the club. Susan added that the Democratic Woman’s Club and the Veteran’s Club will be sharing the club’s booth this year and said the event was a great opportunity for members of the community to meet up.

Treasurer Jonathan Wubbolding gave details on the club’s bank balance, E-Board authorization for a Facebook ad fund, and the purchase of stickers on which to advertise the club and attach to the GO Team’s door hangers, as well as a food budget.

He addressed a question from the last meeting about how to become eligible to vote at club meetings. He explained that a person needed to have given their membership application and club dues, attended at least one meeting prior to voting, and must have signed in at each meeting. Susan added that it’s important to sign in to show you were at the meeting.

Susan then welcomed all the candidates and campaigners who were scheduled to speak.

She introduced incumbent Superior Court Judge Keri Katz, who was appointed by Gov. Brown in 2014, and was running in a countywide election for Seat 38. Katz previously served for seven years as a Superior Court Commissioner, a position appointed by judges. She described the rigorous vetting process she went through before gaining those positions and listed the endorsements she’d received for this race, including that of the San Diego Democratic Party.

Susan introduced Lynda Barbour of the American Cancer Society, who was circulating a petition for a new tobacco tax initiative, the “California Healthcare, Research and Prevention Tobacco Act of 2016”, which would raise the present tax from $0.87 to $2.00 packs and tobacco products, and include e-cigarettes. She said that raising prices was one of the best ways to reduce youth smoking and help people quit.

Susan introduced Doug Case, with the Toni Atkins for State Senate Campaign, who was circulating a petition for a criminal justice initiative to be put on the November ballot. He said it would reduce our non-violent prison population and help with rehabilitation and noted that the Democratic Party had endorsed it.

Susan provided a recap of the Roosevelt Dinner, recalling John Loughlin’s speech about why people should to pay attention to Democratic values and stay positive and life-affirming when using social media. She also expressed the desire to form an official PAC and asked that anyone with expertise about setting one up to speak to her.

Susan announced that a club-sponsored Meet & Greet for Ed Harris would be held Friday, March 20, 5:30 – 7:00 PM, at 1405 Savoy Ct. in Point Loma, explaining that the club needed to do more than just endorsements, but also follow up with action. She said the club doesn’t give money to candidates, but could host get-togethers where people can contribute directly to those running.

She then introduced Ed Harris, who talked about his website, www.harrisformayor2016.com, where people could find event listings and more information. He also asked people to take campaign signs he’d brought and asked that everyone to “Save the Date” of May 7 for his big kickoff party at 4 PM. He said his race was very winnable, especially considering the expected 65% voter turnout (40% Democrat, 29% Republican, the rest Declined-to-State) for the presidential race, but emphasized that his was an all small-money campaign and that everyone’s help was needed. Susan emphasized that our Point Loma Democratic Club is his home club and encouraged everyone to take part in his campaign. A sheet was available to sign up (or you can signup on his website.)

PROGRAM, Part 1: How to Vote for Delegates to the Democratic National Convention
Describing the program as “Caucus Ed 101”, Susan turned the presentation over to Jonathan Wubbolding, Jess Durfee, and Ruth Rollins.

Jonathan sought to clarify the difference between the types of delegates and to show people how to participate in the election of local delegates. He and the others explained that there were two types of delegates: pledged delegates and unpledged superdelegates. The pledged delegates consisted of three types: Congressional District Level, At-Large, and Party Leaders & Elected Officials (PLEOs). Superdelegates consisted of unpledged PLEOs who don’t have to commit until they actually cast their vote. San Diego County had four: Three members of Congress and Democratic National Committee member Jess Durfee, who was elected by the California State Executive Board (which has about 350 members).

The day’s main topic was Congressional District-Level Delegates, of which California has 317 out of its 546 total number (because of the population) of delegates, meaning that about 60% of the state’s delegates are chosen by the caucus voters. The state has 53 Congressional Districts, and each district holds a caucus for each presidential candidate on Sunday, May 1, at which its residents vote. The number of delegates an individual district has was determined by the number of Democrats who voted in that district in the past two elections. For example, the club is located in Scott Peter’s District 52, and will hold one caucus for Sanders and one for Clinton (but you can vote in only one of those caucuses). Each caucus will vote to elect 6 potential delegates (3 female and 3 male) from a pool of candidates who are registered Democrats from that district and whose application was filed through the California Democratic Party website and approved. Jess pointed out that gender balance is carefully observed throughout the state’s delegate selection process.

Ruth pointed out that the club has 10 members running as candidate delegates, though not all in the club’s district: Maximilian Cotterill, Michael Johnson, Michelle Krug, Rena Marrocco, and Mike Thaller for Sanders; and, Deborah Currier, Nathan Fletcher, William Rodriguez, Craig Roberts, and Brian Polejes for Clinton.

They explained that the locations for each district’s caucuses could be found on the party’s state website, www.cadem.org, and that you had to be a registered Democrat in that district in order to vote, but that you could change your registration from undeclared to Democratic at the caucus.

Per California rules, the schedule for the caucuses on Sunday, May 1st was as follows:

Jess said most people vote as soon as they arrive, then leave. He advised candidates to not rely on picking up a lot of votes there because most candidates have already recruited their voters, and could be in and out in 10 minutes.

It was explained that not all of the caucuses’ winning candidate delegates will actually become convention delegates because after the California Primary on June 7, the voting results from the potential delegate’s individual district will determine the proportional allocation of that district’s delegates. For example, if Bernie gets 50% of the vote and Hillary 50% in District 52, only three of Bernie’s potential delegates and three of Hillary’s six will actually become delegates to the national convention. If one of the presidential candidates gets less than 15% of the vote in that district, none of his or her potential delegates will go to the convention, but all six of the other’s will.

Jess said the GOP’s’ method of delegate allocation wasn’t a democratic process. No caucuses are held for the voting public; party officials meet behind closed doors and appoint the delegates.

Jonathan asked for volunteers to work at Bernie’s District 52 caucus, which Ruth was convening. Susan explained that she would have made announcements about Hillary’s caucus, but was unable to make contact with them.

After a coin toss, Deborah talked about how JFK inspired her interest in politics, and fearing that history might repeat itself, spoke about her recollections of the first election in which she voted and its similarities to the present election. In 1972, the Viet Nam war was raging, the economy in much worse shape than today’s, and the youth movement much more massive and vocal. George McGovern was a liberal, anti-war, anti-establishment candidate, and an advocate for the poor. To help illustrate, she showed a campaign poster from 1972 of McGovern, the Democratic candidate, dressed as Robin Hood. His followers were certain he’d win. Deborah then showed a map of the election’s final results, only one state was blue and the rest were all for Nixon. She then claimed that Hillary’s so-called “baggage” was actually empty and only the product of a 25-year Republican witch-hunt. Lastly, she said that it was past time for a woman president and that Hillary was the most qualified candidate, and complained that we keep waiting for the perfect woman candidate, even though we’ve never had a perfect man.

Mike Johnson said he felt this election was about the life or death of the Democrats. He explained that he became a Bernie supporter after hearing him talk about the role of money in our political life and about his determination to take on the millionaire and billionaire class. He spoke about serving in the Viet Nam War, voting for the first time in 1968, and how he always has the men who died in the war in mind when he votes. He compared Sanders to FDR and told members that we needed to be “AmeriCANs” again. Mike used a chart to show who was donating to each campaign, saying it was indicative of whose side each candidate was actually on. It listed Hillary’s top donors as the big banks and corporations and Bernie’s as labor unions and regular people, causing him to reach the conclusion that Bernie was on the people’s side. He said that money was killing the future of our children and complained about college debt and trade agreements that go against the middle class. He confessed that he was for Hillary at first, but now felt that to put his grandchildren first, he needed to vote for Bernie.

Afterwards, each club member had 30 seconds to talk about which presidential candidate they planned to vote for in the June Primary. Over half mentioned that in November they’d vote for whoever ended up winning the nomination. Below is a sampling of comments:

Pro-Bernie: Praise for his bold ideas, idealism, and movement in a new direction; making public colleges free and young people interested in politics again; his speaking in favor of the Palestinians; pushing the party further left; and, enabling other liberal candidates to be elected by riding on his coattails. Belief that he’d do better than Hillary against the Republican candidate in November; that the mid-term elections will bring in more Democrats enabling Bernie to accomplish more as president; that he was the greatest candidate of our lifetime; that the rich holding so much power was the issue of our lifetime; and, that there was too much negativity associated with Hillary.

Pro-Hillary: Praise for her expertise in foreign affairs; her early work on health insurance reform; her support of Democrats down the line; her handling of the 11-hour grilling by Republican congressmen; and, her ability to get things done in a practical manner. Belief that Hillary has the best shot at winning; that the GOP fears her the most; that we were way overdue to elect a woman and this one was super-qualified, competent, and capable. Belief that Bernie was unelectable and unprepared to be a world leader; has been an ineffective member of Congress and was too idealistic to be effective with Congress if elected; has a poor record on gun control; and, has called for a revolt.

Club members then divided into Pro-Hillary, Pro-Bernie, or Undecided groups to lobby and perhaps sway people to their side. Afterwards, there was a headcount and it was announced that the vote was evenly divided.

Susan thanked everyone for coming, issued a reminder to turn in badges, and invited everyone to meet afterwards at Point Break Café at 2743 Shelter Island Drive.

The meeting was adjourned at 5:43 PM.