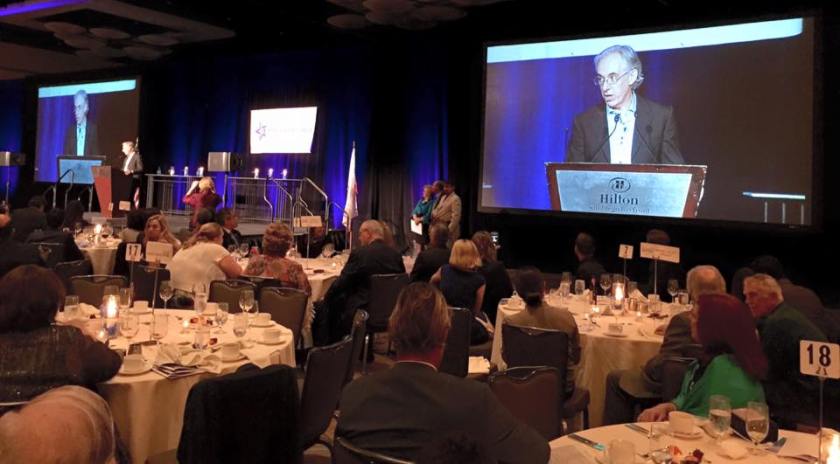 Our club’s Communications Chair, John Loughlin, was the recipient of the San Diego County Democratic Party’s Volunteer of the Year award, here’s a transcript of his speech at the 2016 Roosevelt Dinner that calls on all of us to be thoughtful when posting on Social Media.

Oh my. Deary me. Crikey,

I can honestly say I don’t deserve this award but

I’m happy to accept it on behalf of all the backroom geeks and nerds who help clubs, candidates and elected officials spread our Democratic values.

I’m also happy to accept it to thank all the folks who nominated me.

First and foremost I must thank Geri Carmack, who probably rues the day she dragged me along to join the Point Loma Democratic Club.

Also Nancy Witt who worked on recruiting me to the GoTeam, for literally years,

and many thanks to my Party mentors Ruth Rollins and Susan Peinado.

Instead, as I have a minute, like all campaigners I’ll make an ask

I first encountered the web when I moved to California in the early 90s
It’s hard to remember now, but back then we thought the Internet held the promise to:

that was before they figured out how to place adverts next to cat videos.

People have a strong desire to engage with digital media,  even at risk of death – texting while driving

This election cycle clearly demonstrates the good and bad uses of technology for spreading messages of hope and hate.

At its best digital media gives us a new chance to engage positively with the world, to share our values and to recruit minds and voters to our cause.

Best done by telling stories. Positive stories. Stories that move us, bring us together, and let us see the world in a different light.

Let’s make sure that as Democrats we don’t spend time on ridiculing and belittling our opponents with anti-social media.

Let’s spread the word as to who we are, and why others should care.

John also meant to thank Eleanor and Franklin D. Roosevelt and on behalf of Anne Donnellan he asks us all to honor the candidates who strive to foster their enduring values.