She then gave a ‘rant’ on the conditions of club’s meeting location – the Point Loma Assembly – and the need for monies for air conditioning and a new electrical system.

Susan then introduced elected officials and candidates and welcomed each to give 2 minutes of remarks: 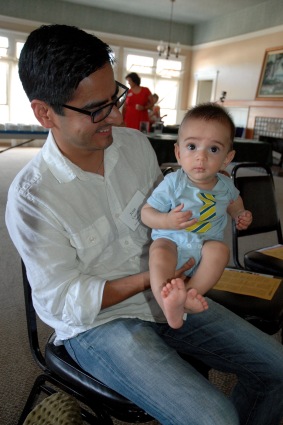 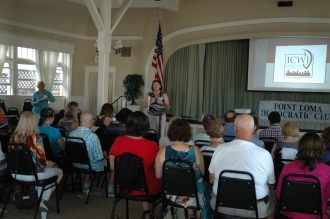 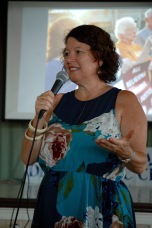 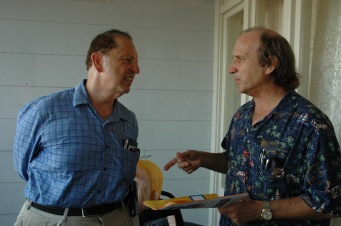 Program: Fight for $15 – Rabbi Laurie Coskey of the Interfaith Center for Worker Justice

[You can listen to Rabbi Laurie Coskey’s talk here.]
Rabbi Laurie Coskey was introduced. She is the Executive Director of the Interfaith Committee for Worker Justice (ICWJ). The ICWJ represents clergy, churches, mosques, synagogues, faith and justice organizations, and people of faith around San Diego who, called by their respective religious traditions, work for justice and stand up for the poor and marginalized.

In partnership with low-wage workers, ICWJ brings visibility to the struggle of hard working individuals and working families trying to make ends meet in San Diego County through campaigns in the workplace, with policy makers, and around critical issues such as living wage policies, immigration and affordable housing.

Rabbi Laurie Coskey presented on the topic of the Fight for $15 and what raising the minimum wage means to real people living in our region. She spoke of organizing campaigns to assist low- wage workers and to unionize these workers so that they have a just contract, wage, and recourse. She also spoke of ICWJ policy campaigns.

She reported that many other municipalities have already passed initiatives to increase the minimum wage, including Oakland and San Francisco and Los Angeles. San Diego faces a June ballot initiative to modestly increase our City’s minimum wage.

She was joined by club member Steve Rivera and workers and organizers from the Fight for $15. It was noted that in just 3 years -what was started by 200 Fast Food workers – the Fight for $15 has become an international movement that connects generations of workers, cuts through borders, unites workers from over a dozen industries. Workers spoke of their campaigns to win better wages, benefits, a voice on the job and a step out of poverty. Rabbi Coskey led a discussion on how the Point Loma Democratic Club can participate in passing the minimum wage ordinance and get more involved in exciting campaigns for economic sustainability.

Old Business
Endorsement Committee: Dev Zaveri-Tabb and José Castillo. The club endorsement questionnaire, policies and procedures were again presented (as they were presented at the last meeting). Under Section 1, Letter B: clerical errors were corrected. Under Procedures, B-4, in order to comply with new guidelines from the County Party, the word “confidential” was dropped in connection the word “vote.” Ruth moved to adopt the endorsement policy and procedures and questionnaire and Becca Taylor seconded the motion. Discussion ensued. Miriam Plotkin moved and Howard Wayne seconded a motion to table the matter until the next meeting. The motion to table the matter failed 19 – 6. Discussion ensued on Section 2-B-3. Howard moved to amend and strike Section 2-B-3 and Craig Roberts seconded the motion. Discussion ensued and it was determined that the Endorsement Committee was a body to recommend endorsements to the club body; the club body is the entity that actually makes the endorsement. Howard Wayne and Craig Roberts withdrew their motion. Susan called the question to adopt the endorsement policy and procedures and questionnaire. The motion passed 27 – 1.

Upcoming Events and Announcements
Help Fellow Democrats: Craig Roberts informed club members that Democrats Suzie Ditmars and Mike Thompson lost their home to a fire. The Dems for Equality Club have set up a GoFundMe site: https://www.gofundme.com/t34qmtys to help cover necessities while they put their life back together. Additionally, Suzie and Mike are in need of housing after October 1st for approximately 6 months.

Lifeguard Fundraiser: Wednesday, September 30, 6:00pm
Ed Harris requests our help with a fundraiser at Galaxy Taco, 2259 Avenida De La Playa, La Jolla. This fundraiser will assist a young lifeguard who severely damaged his back while making a rescue in August. Despite sustaining his injuries while on-duty, Gareth is only receiving approximately $250 a week from the City of San Diego Workman’s Compensation program (less than half of what he would receive if he were working full- time.)

Miriam Plotkin, candidate for Treasurer of the California Democratic Party Disability Caucus, asked for assistance on sending in ballots to elect her to this position.

Library Fine 50% Reduction Ends
The last day to take advantage of returning overdue books and materials for 50% fine forgiveness is September 30th. Pay 50% of your existing book and materials fines due and the Library will erase the remaining 50%.

Cherchez La Femme – Look for the Woman
October 2 through November 1. The Women’s Museum of California. 2730 Historic Decatur Road, Suite 103. San Diego Book Arts asks the question: “What does it mean to be a woman.”

The Compassion Experience
Friday, October 9 through Monday October 12. A free, interactive tour of lide hosted in the developing world hosted by the Point Loma Community Presbyterian Church. This will give visitors an insight into the lives of children living in Guatemala and Uganda, to better understand the realities of global poverty. Reservations are required: http://cts.compassion.com/events/243

NEXT CLUB MEETING
Next club meeting will be on the topic of Veterans Suicide Prevention and will occur on October 25th at 4:00pm. Speakers include Congressman Scott Peters and Nathan Fletcher.