President Susan Peinado called the meeting to order at 4:03 PM.

Welcome and Introduction of Elected Officials and Candidates
Susan welcomed and introduced guests including new members Deborah Currier, Justin DeCesare and Kaitelyn Hailey. She also welcomed candidates, including Rafael Castellanos, who is running for City Attorney. Rafael provided an overview of his candidacy and campaign.

Program: Short Term Rentals, WTF? – What’s the Future?
Susan welcomed and introduced the moderator, Omar Passons, attorney at Stutz Artiano Shinoff & Holtz, a firm that concentrates on construction law and land use. She provided a brief overview of the focus of the panel on short-term rentals in our area. TOT maps reveal alarming growth of more than 400 Short Term Vacation Rentals (STVR) units in just three months in San Diego neighborhoods (2,315 units available on January 15, 2015 vs. 2,738 units available on April 30, 2015).

Omar Passons @omarpassons reported that the San Diego municipal code does not currently define a short-term vacation rental and that ordinance and formal definitions would soon be introduced by City Council. There is a ‘border and lodger’ definition (generally stays are more than 30 day stay) and a ‘bed and breakfast’ definition (generally stays are less than 30 day stay, but this is not within the code) within the code and he shared these codes with attendees. For purposes of our conversation today, STVR will mean the renting of any portion of your property for less than 30 days.

The panelists provided 2 minutes of commentary and background:

An audience member asked about STVR and why the City recognizes them under the B&B code to receive taxes, but doesn’t recognize these entities in the zoning code to protect community quality of life. Joe LaCava stated that this is because the City cares more about money than it does about neighborhoods. Gil Cabrera stated that it also shows the power of the enforcer to pick and choose what gets regulated and enforced.

An audience member asked for the industry perspective on how to protect affordable housing. John Anderson, stating that he doesn’t represent the AirBnB industry, replied that what what is absent from today’s conversation is the number of empty/vacant units in the City of San Diego, of which there are more parcels than there are STVRs. He also stated that the 30-foot height limit has impacted affordable housing stock.

José Caballero, candidate for District 7, questioned why City Council doesn’t just define STVR and include a provision to ban investment properties that are STVR. Discussion ensued.

Mary Orem, OB Property Owner and investor, stated her reasoning for operating a short-term vacation rentals – she stated that investors shouldn’t be negatively targeted within the municipal code.

In response to a question from the audience, Gil Cabrera stated that the Coastal Commission will likely not approve an outright ban of STVRs because of their work and mission to preserve access to the coast.

An audience member raised concerns about the affect of STVRs on local schools and their enrollment.

[This month’s Podcast features a recording of the meeting. Subscribe here to automatically download or you can listen directly.] 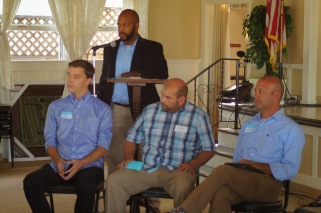 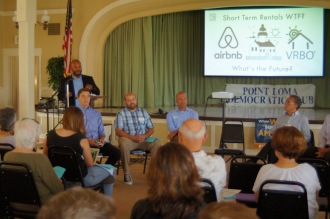 José Caballero in the audience 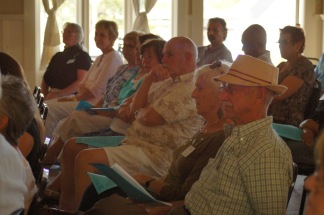 Upcoming Events and Announcements
Jose Caballero, candidate for City Council District 7, introduced himself and his candidacy.

NEXT CLUB MEETING
Next Club meeting is the Annual Summer Potluck and BBQ on Sunday, August 23, 2015, 4-6pm.

Susan adjourned the meeting at 5:39pm.