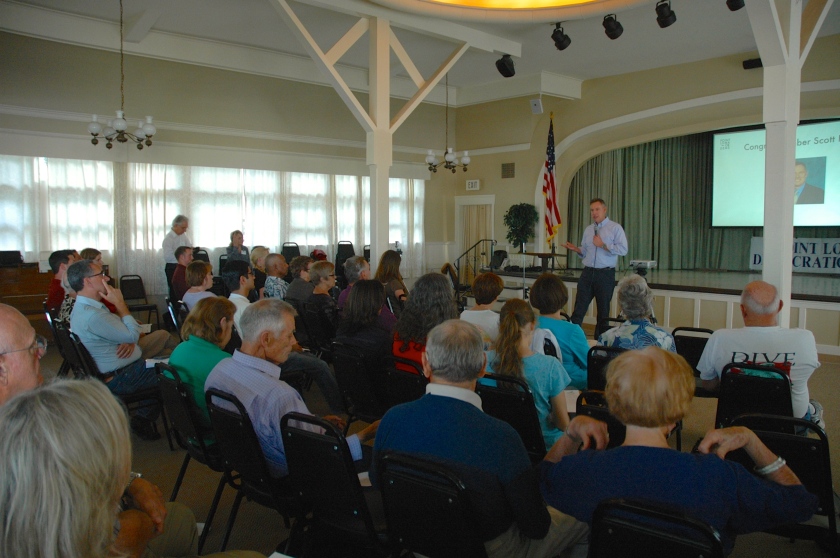 Club President Susan Peinado called the meeting to order at our regular start time of 4:00pm.

Old Business
Liability Insurance Update. It was moved and seconded a motion to authorize the purchase of general liability insurance from the California Democratic Party.
The viewing party of Cowspiracy had a good turnout and it was noted that San Diego 350 and Clairemont Clubs were great to collaborate with on this event.
The club will have 2 or 3 tables at the San Diego County Democratic Party annual Roosevelt Dinner. Please let John know if you are going and your preferred seating arrangements. 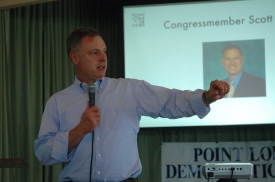 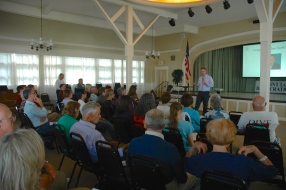 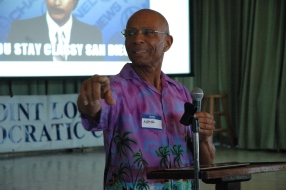 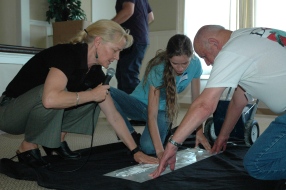 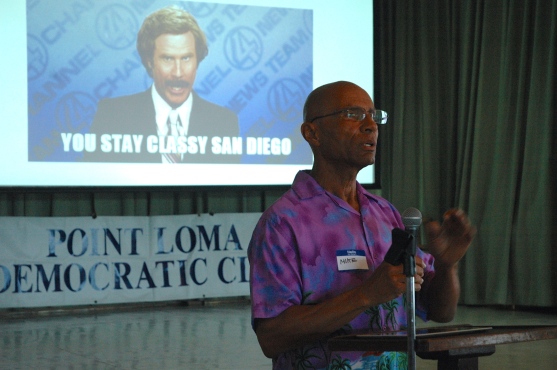 Mike Johnson encouraging members to sign up for the Roosevelt Dinner 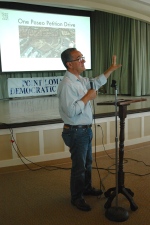 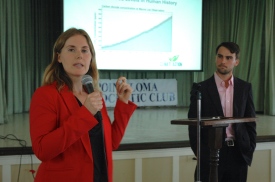 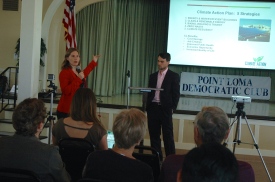 Program: Political Climate
Climate Action Campaign
Kath Rogers and Brian Elliot presented civic engagement and background information on the Climate Action Campaign. Their mission is to stop climate change and to be a leading climate watchdog. The Campaign is building grassroots support and educating communities on the Climate Action Plan. Some of the climate impacts in the San Diego region have included heat waves and intense storms, and it is projected that sea levels will rise if climate change continues.

The Climate Action Plan (CAP) seeks to cut the City’s carbon footprint by 49% by 2035. There are five key strategies in the CAP: energy and water efficiency; clean and renewable energy; biking, walking and transit; zero waste; and climate resiliency. Community Choice Aggregation (CCA) programs and renewable energy were discussed.

They requested an official letter of support from the club supporting the Climate Action Plan. You can listen to the presentation here.

Climate in Washington
Congressman Scott Peters presented on the Climate in Washington. He provided an update on his congressional work and goals. He is seeking to make sure that San Diego’s economy becomes stronger and remains well connected to our armed services industry.

Congressman Scott Peters presented club Vice President Mike Johnson with a framed photo of Mike and Vice President Joe Biden, and congratulated him on winning the “Making the Difference Award” at the upcoming Roosevelt Dinner.

Scott was recently named a Senior Deputy Whip and will focus on strategies to pursue solid legislative objectives. Scott is also a member of the New Democrat Coalition and has brought forth a New Prosperity Agenda that moves beyond the equality topics of equal pay for equal work and raising the minimum wage to a broader investment in the economy with focuses on retirement, infrastructure, intellectual property, and strengthening niche industries like biocom.

He is also working on intellectual property and immigration issues. Scott noted that the debt ceiling will again be a topic of concern and the transportation trust fund will run out of money this summer.

You can listen to the presentation here.

San Diego 350
Jeanne Peterson and James Long of San Diego 350 presented on their organization. 350 stands for the 350 parts per million which scientists say is safe for our environment; we just passed 400 parts per million. Due to climate change, they noted that San Diego County will face severe water shortages and an increased number of wildfires. Scientists have also predicted San Diego sea levels will rise of 12-18 inches by 2050. If you green your diet, you’ll make an impact to reduce green house gases – one example was skipping the consumption of one hamburger which would cut 600 pounds of emissions. To get involved, go to www.sandiego350.org

You can listen to the presentation here.

or view the video.

Slides from the meeting (PDF).

One Paseo
Joe LaCava presented on the One Paseo petition drive that seeks to require the City Council to rescind their approval or send it to the ballot in 2016. The deadline for signatures is on Wednesday March 25. He noted that the project lacks smart development credentials and is not connected to appropriate mass transit. He encouraged club members to sign the petition.

You can listen to Joe’s presentation here.

New Business
We’re required to make some changes to our bylaws to be compliant with the rules for the pre- endorsement conference in January. The Bylaws Committee will be chaired by John Loughlin and will report on this at the next meeting. Club members that are interested in participating in the Bylaws Committee should contact John Loughlin immediately.

Susan noted that the club also needs to form an Endorsement Committee to help craft guidelines for early and regular endorsements, and create an endorsement questionnaire. (Dev Zaveri, José Castillo, and Anne-Marie Kaukonen offered to work on the Endorsement committee.)

Vice President Report
Vice President Mike Johnson briefed the audience that he would receive an award for his service to the Democratic Party at the Roosevelt Dinner and encouraged club members to purchase their tickets ASAP so that there was a large contingent of supporters in the audience.

 Susan adjourned the meeting at 5:45pm.