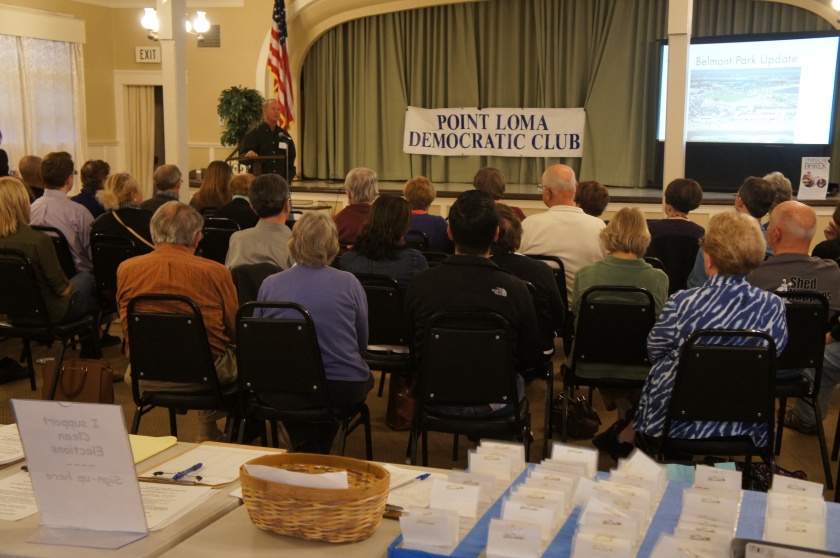 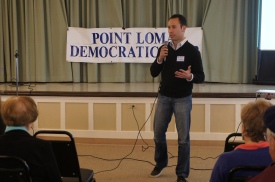 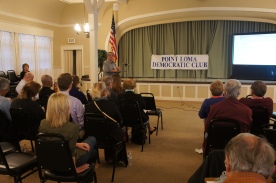 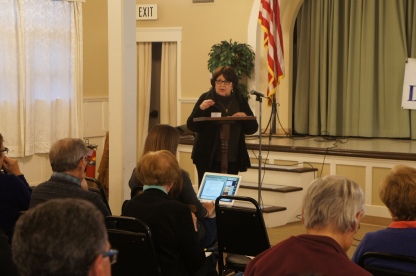 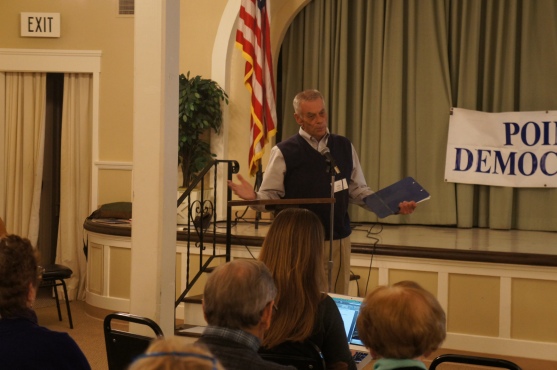 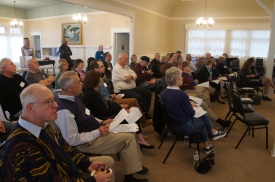 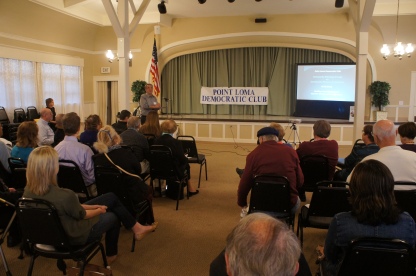 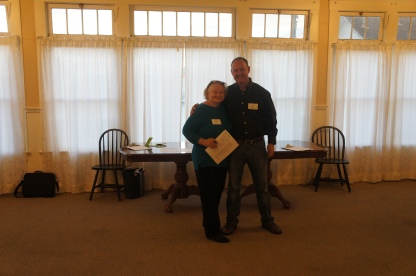 Club President Susan Peinado called the meeting to order at 4:00 PM January 25, 2015 and thanked everyone that brought snacks.

Susan then introduced clubmember Sarah Boot, candidate for Assembly District 78. Sarah thanked the Point Loma Club and its members for supporting her campaign for City Council and provided an overview of her candidacy for the 78th Assembly District and noted that she has received the endorsement of Assembly Speaker Toni Atkins.

Program: Civic Engagement
   For this month’s meeting the club welcomed local candidates who are setting the debate through their ongoing work with local institutions and body politic. Discussion also included the importance of civic engagement and getting involved in one’s community.

 Rafael was sworn in to the Board of Port Commissioners on April 15, 2013, to represent the City of San Diego. He highlighted climate action, environmental stewardship, and addressing homelessness as top priorities for the Port of San Diego.

The Port of San Diego was created by the State Legislature to manage San Diego Bay and its surrounding waterfront land on December 18, 1962. It is the fourth largest of the 11 ports in California, and it has invested hundreds of millions of dollars in public improvements in its five member cities – Chula Vista, Coronado, Imperial Beach, National City, and San Diego. The Port oversees two maritime cargo terminals, two cruise ship terminals, 18 public parks, the Harbor Police Department, and the leases of hundreds of tenant and subtenant businesses around San Diego Bay. The Port is an economic engine (250 million bananas go through the Port a month), an environmental steward of San Diego Bay and the surrounding tidelands, and a provider of community services and public safety. The Port has a $145 million annual budget and is governed by a seven-member Board of Port Commissioners; one commissioner each is appointed by the city councils of Chula Vista, Coronado, Imperial Beach and National City, and three commissioners are appointed by the San Diego City Council.
Rafael spoke briefly about his candidacy for San Diego City Attorney 2016 and his focus to prioritize the Community Justice Department to have a bigger impact on our quality of life.

A former president of the San Diego La Raza Lawyers Association, Rafael is also an advisor to San Diego Foundation’s Center for Civic Engagement Climate Initiative, and is a director of the San Diego Regional Economic Development Corporation.

Rafael is a partner at Solomon Minton Cardinal Doyle & Smith LLP where he specializes in commercial real estate and business transactional law. He earned a Juris Doctorate from the University of Chicago Law School as a Cornerstone Scholar graduating in 2002. He is a member of the California State Bar Association, the San Diego County Bar Association, and the Mexican American Business and Professional Association. Rafael was named one of the San Diego Daily Transcript’s Top Young Attorneys in 2008, and in 2011 was named one of San Diego Metro Magazine’s 20 Men Who Impact San Diego.

      Joe LaCava
Clubmember Joe LaCava provided an overview of his civic engagement experience with specific emphasis on Community Planning Groups (#CPGsWork). He highlighted the recent accomplishment of Barrio Logan’s Community Planning Group having their first meeting a few weeks ago and provided an overview on zoning, planning, and community engagement. He stressed that Planning Groups must not be only reactive but proactive in discussion community issues, such as short-term vacation rentals.

 Joe is a public policy consultant and registered civil engineer, a San Diego State University Civil Engineering graduate, and a member of the Urban Land Institute. Joe has been a community leader for nearly 15 years and a tireless advocate for neighborhoods at city hall.

He is Chair of the San Diego Community Planners Committee, the umbrella organization to the city’s 42 community planning groups. In that capacity he was instrumental in framing and managing the first ever city-wide neighborhood input process on infrastructure priorities as well as securing the first ever reimbursement of planning group expenses. Joe is also Chair of the La Jolla Community Planning Association. Joe has served and led a number of public working groups and committees on policy and infrastructure; including, pedestrian safety, transit, Rose Canyon trail, PureWater, CDBG funding, utility undergrounding, to name a few.

Joe started his career designing public infrastructure in the City of San Diego and at military facilities throughout the southwest. As a consultant he has provided creative problem-solving on community building projects in California, the western United States and internationally in Canada, China and Papua New Guinea.

    Dodd-Frank Amendment
Gail Mackler made a call to action on Scott Peters’ recent vote to strike provisions of Dodd Frank and other regulations for the financial industry. The new Republican Congress voted to reverse many financial regulations and protections that were established by Dodd-Frank.

She stressed that Democrats must not abandon Main Street and side with Wall Street. She requested the Point Loma Democratic Club to sign onto a letter that admonishes Congressman Peters for weakening crucial parts of Dodd-Frank.

Gail distributed copies of a draft letter for members to use to write or call Scott’s office. Susan reminded everybody to be respectful when calling elected officials and talking to their staff, especially if we are calling as clubmembers.

Update on Belmont Park – Ed Harris
   Former San Diego City Councilmember Ed Harris brought us up to date with news on the lease renewal for Belmont Park and provided an overview of his campaign for the Assembly 78th District.

Ed noted that the same bad deal is coming back to the City Council for approval that would result in taxpayers losing money and that the City Attorney did not issue the requested legal opinion.

 The City Attorney subsequently pulled the action/proposal from the City Council docket. Ed will continue to follow this matter, advocate for a good deal for San Diego taxpayers, and report back.

Ed was our City Councilmember for District 2 until the end of last year, and is a candidate for the 78th Assembly District 2016

Officers Reports
Treasurer’s Report – Barbara Houlton
Barbara informed the membership that only 75 members are current on their dues membership. She also reported on our budget and rental details for the Point Loma Facility.

Nominating Committee Report
Ruth Rollins reported her nomination committee report and thanked the Nomination Committee members: Anne Marie Kaukonen, Nicole Sours-Larson and Dave Fisher. She noted that the Committee successfully convinced all current Club Officers to seek-re-election (Susan Peinado as President, Mike Johnson as Vice President, Barbara Houlton as Treasurer, and Gretchen Newsom as Secretary.) She noted that these positions would be voted upon at the February club meeting.

President’s Report – Susan Peinado
Susan announced birthdays for members Anne and John and thanked Jonathan Wubbolding. She extended congratulations to our ADEM winners: Gretchen Newsom, Gail Mackler, Cynara Velasquez, Rhoda Quate, Brian Polejes, and Fred Rogers. 451 Democrats turned out to vote in the ADEM election, the second highest in the state and a record for the 78th.

Our next club meeting is February 22nd at 3:00pm for socializing and a meeting commencement time of 3:30pm – i.e. February’s meeting will start 30 minutes earlier than usual!

Tears of War Exhibit – Stories of Women Refugees in America

Organized together with 350.org and the Point Loma and Clairemont Democratic Club.
Vegan pot luck.

       Member Announcements
Clubmember John Hartley reported on his progress to get a campaign finance reform measure passed.
Becca Taylor reported that she was appointed as an ADEM delegate and that young Democrats would soon be hosting a fundraiser and voter registration drive. Details available here.
 
 Katheryn Rhodes discussed and distributed her petition to Preserve Point Loma and local planning matters related to hillside overlay zones and that there would be a meeting on Monday, February 9th at 2pm meeting. More details are available here.

START TIME WILL BE 30 MINUTES EARLIER THAN USUAL
Susan adjourned the meeting at 5:33pm.
Minutes taken by: Gretchen Newsom, Secretary