Dr Mike and his Likes 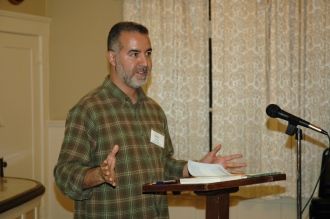 Before the meeting during the Social Time club member Judi Curry presented her latest book, and samples of her delicious jams.

Club President Susan Peinado called the meeting to order at ~4:02 PM and reminded us of the proverb that was used to promote the meeting – “Just when the caterpillar thought the world was over, it became a butterfly.”

Elected Officials
Dr Michael McQuary thanked everyone for their support in his recent successful campaign for School Board. He was wearing a shirt that shows the number of votes he received, or as he prefers to explain to younger voters: the number of Likes he got.

Dr Mike wants to encourage an ongoing dialog with the community, and will be available the first Saturday of every month at 9am at the Living Room on Rosecrans, and at 10am at OB People’s.

School Board President Kevin Beiser also thanked everyone and reminded us that we can aways contact him with questions or concerns at: kevinbeiser@yahoo.com

Main Presentation
The Honorable Howard Wayne spoke about the election results beginning with the national trends and the expected results of low turnout elections. Many of the predictions and insights that Howard spoke to in January were confirmed, but there were a few surprises including Mark Udall in Colorado (where an all mail ballot and lack of immigration reform may have depressed Dem turnout).

The House of Representatives now has the most Republicans since Herbert Hoover, but 30 of those are in districts that Obama carried in 2012 and could be reversed in the Presidential election year, 2016.

Although GDP and the stock market is up and unemployment down, the fact that most of the gains have gone to the top 1% has left a majority of voters still feeling pessimistic. Howard referred to a remark Steve Rivera made at a recent meeting – you can run the greatest campaign, but you need a message. This was clearly lacking in many of the Democratic campaigns.

At the California state level with no defining issues on the ballot and no real competition in the Governor’s race there were 2.5m fewer voters than in 2012. San Diego County showed its red coloring with most of the statewide races being won by Republicans in the county, with the exception of the Governor’s race.

The South Bay area had some great results, but Carol Kim’s race was a great disappointment as was the Mayor’s race in Escondido.

In 2016 the city will have the odd number districts in play. District 3 will be won by a Dem, as will District 9. It’s normally hard to unseat an incumbent but the unpopular Scott Sherman could be in trouble against Justin DeCesare in District 7. District 1 is up for grabs, it’s been held by a Democrat for 16 years but the district has a lot of registered Republican voters. Club members Barbara Bry and Joe LaCava are both running and the Republican may well be Ray Ellis who lost to Sherri Lightner in 2012. There’s been no mention of a Dem running in District 5, yet. Jan Goldsmith will be termed out as City Attorney and there are at least two Democrats running for that position, Rafael Castellanos and Gil Cabrera. The results of these races could be determined at the lower turnout primary in June.

Toni Atkins will be termed out in the 78th Assembly District. Ed Harris has declared he’s running and Sarah Boot is considering to run as well.

It’s widely believed that Barbara Boxer will retire from the U.S. Senate and both Gavin Newsom and Kamala Harris are expected to run. 2016 may well see a reversal of the Senate to Democratic control as there are several vulnerable seats up for grabs in states that Obama carried.

Howard asked for a show of hands for preferred Democratic Presidential candidates and Elizabeth Warren just squeaked ahead of Hillary. Although extremely well qualified, Hillary has had some problems capturing a populist economic message as Bill’s term saw a lot of deregulation of the financial markets.

Howard then took questions from the audience.

Nicole Larson
– Why can local elections end in June?

Howard Wayne and Jess Durfee had worked on moving the city to a Top Two runoff at a more representative election in November. Labor and others had approached Council President Todd Gloria for it to be put on the ballot, but Todd didn’t do it. Chula Vista has a Top Two process, and San Diego is behind the times. We should continue to ask our council members to put it on the ballot.

Philip Manson
– Asked what Alex Padilla as the new Secretary of State can do to improve voter registration and participation?

Howard talked about his recent experience as one of Scott Peters’ observers at the San Diego Registrar of Voters. From January 1st, as long as a mail ballot is post marked by Election Day it will be counted. There is still a relatively low percentage of Permanent Mail Voters in California and efforts could be made in this area. Day of election registration could also help.
(Arv Larson commented that this year it was possible to drop of mail ballots at locations around the county.)

Nicole Larson
– Referred to the recent SPJ Society Professional Journalists panel discussion where Dave McCulloch portrayed Carl as victim and asked if we have seen the last of Carl DeMaio?

Howard spoke to how Carl has only won election in a District 5 election, that heavily favors a Republican candidate. He has lost all of his competitive races, but it will be interesting to see if he’s still able to raise money.

ADEM Elections
Steve Rivera talked to the elections for the 78AD that will take place on January 10. The club will be putting a slate together. [Update:  Details are available here.]

Treasurer’s Report
Barbara Houlton wanted us all to be aware that we’re spending all of our annual income. Rather than raise membership dues Barbara asked everyone to consider contributing an extra $10 when renewing their membership for 2015, if they can.

Website and Social Media
John Loughlin spoke about the website and showed how members can use the Calendar page to check on upcoming events, and to easily sync the details to their phones, tablets and laptops. With the lack of a quality newspaper in San Diego it’s important that club members become comfortable with reading and searching for news online, and with sharing articles of interest on Facebook and Twitter.

New Business
Susan Peinado appointed a nominating committee for officers of the club, as we may need a Secretary for 2015 as Gretchen Newsom’s workload is growing fast. We also need an Events chair.

Announcements
Tommy Hough introduced himself as our newest member and invited everyone to join the San Diego County Democrats for Environmental Action www.sdenvirodems.com. He talked about an Environmental Summit they’d organized this year with Scott Peters’ participation and that their next meeting will be in January.

NOTE: registration was cancelled because of the weather forecast for Wednesday, Dec 17, 10:15am-12:15pm
3rd Ave& B Street Plaza near Civic Theatre

Point Loma Assembly
January 8, 6-8pm
Save the Date! 100th party for the building. ATTENDANCE is LIMITED

The meeting was adjourned at 5:35pm

Members retired to the Point Break Cafe to get straight to work with the nominating committee.