Notes From July’s Meeting – We Must Win in November

The July meeting was called to order at 4pm and offered some interesting perspectives on the June Primary results as well as setting expectations as to what we can achieve at the General election in November.

The thought of suffering with Carl DeMaio as our representative for the 52nd is a great motivational factor for many volunteers. 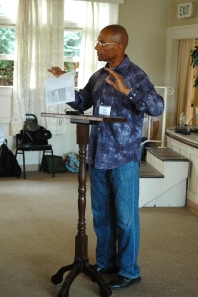 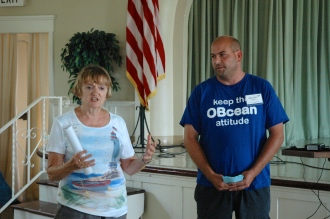 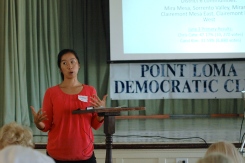 The Meeting Agenda is available here.
You can download the slide presentation for the meeting here.

Steve Rivera began with an overview of the 2014 Primary. He used a set of results that he first presented at the Region 20 California Democratic Meeting on June 8. Although we like to remind ourselves (constantly) that San Diego County is getting bluer, Steve showed it’s still a lot redder than the statewide results, especially for low turnout elections. Although Jerry Brown polled 54:19 against Kashkari statewide, he only won 47:28 in San Diego County. Similarly with Newsom:Nehring, statewide 50:24, but in San Diego 43:35. Statewide Padilla just beat Peterson, but in our county Peterson was 10% ahead.

Cynara Velazquez (who’d just driven back from the Democratic BBQ in North County!) presented analysis of turnout in the Primary. There has been lots of suggestions over the years to increase turnout such as making election day a holiday or moving it to the weekend, but Cynara emphasized the two most effective things we can do right now. Register or update all Democrats as Permanent Mail Voters, and make sure they receive a ballot in their native language. The differences in returned ballots from those two factors are startling.

Before the next presenter spoke about Carol Kim’s campaign, Sarah Boot addressed the club. She was greeted by rapturous applause and graciously thanked the club for our support, our fundraisers and meet-and-greets, our attending her debates (where having a friendly face in the crowd makes all the difference), for volunteering, and for our social media amplification.

Christina Wu, campaign manager for Carol Kim, then discussed the strategies that the Kim campaign is focused on. She politely pointed out that Cate is a carpet bagger who only recently moved to the District so he could run. She encouraged members to sign up for a walk shift, phone banking or making a financial contribution. We may not be able to outspend Cate and the Lincoln Club but we can talk to more voters, and share the reasons to grow the middle class.

In place of Lucas O’Connor, Scott Peters campaign was represented by Rebecca Taylor and club member Howard Wayne. Volunteers were encouraged to walk, phone and talk to voters. You can find more details at www.scottpeters.com

Kelly King, who heads up voter registration for the County Democratic Party, spoke about driving voters to register online by placing buttons online, and rewarding the clubs who create the most traffic for voters.

David Warmoth, from the San Diego Democrats for Equality, outlined their club’s proposals to increase participation by only allowing ballot initiatives in General elections in November, and having the top two candidates in the Primary run off in November in the General. There are versions of the proposals for both the City Council and County Board of Supervisors. David encouraged us to spread the word to non-partisan groups such as the League of Women Voters, Common Cause, Fair Elections and 350.org and answered questions from members. Steve Rivera proposed that the club endorse the proposals, Arv Larson seconded, and the motion passed unanimously.

The club signed up its first Student Member, Tim Hanna, who grew up in Pt Loma, studied Political Science and Government at Berkley and is a J.D. Candidate at the University of San Diego School of Law. Tim’s working with the Scott Peters campaign and is our 135th member to join this year.

Club members Giovanni Ingola and Jane Gawronski of the Ocean Beach Planning Board spoke about the Ocean Beach Plan Update that is supported by the OB Town Council, OB Community Foundation, OB Mainstreet Association, OB Planning Board, OB Historical Society, OB Community Development Corporation and the Friends of the OB Library. The idea is to keep OB the way we like it with Floor Area Ratios the same as they were stipulated in 1976. (The City Council passed the Update unanimously on Tuesday July 29 see more details here.)

The meeting adjourned at 5:39pm

Announcements made at the meeting