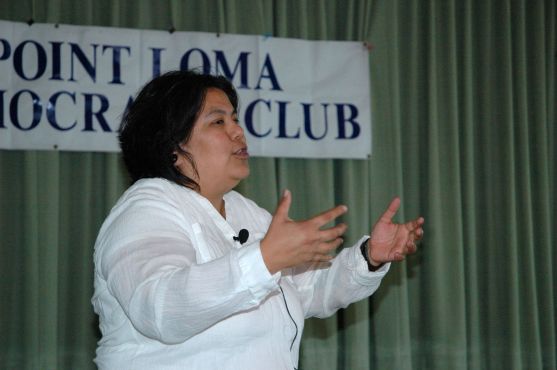 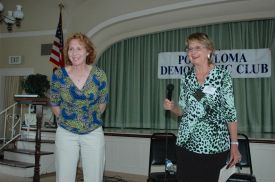 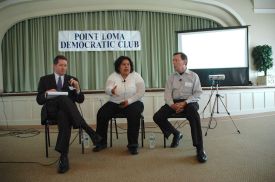 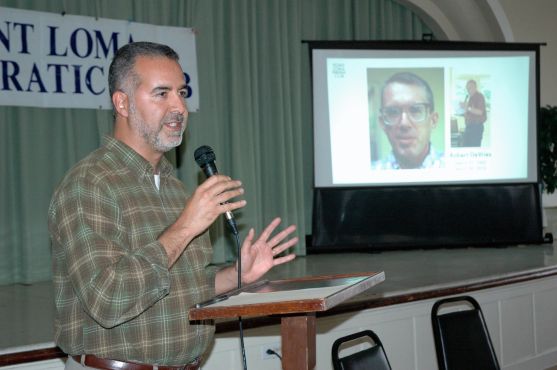 Club President Susan Peinado welcomed and introduced Dallin Young from the California Democratic Party and representative from the Campaign to Re-Elect Congressman Scott Peters. He requested volunteer canvassers every weekend until the election in June. You can contact Dallin at d.young@cadem.org

Susan welcomed and introduced Carla Keehn, candidate for San Diego Superior Court Judge Number 20. She provided a brief overview of her background and campaign (carlakeehnforjudge.com). Carla Keehn was endorsed by the club, unanimously.

Susan welcomed and introduced Sarah Boot. She thanked everyone that attended the Point Loma Meet and Greet at Ruth Rollins house. She also announced that she received the endorsement of many national women’s groups. Ms. Boot asked for volunteers and encouraged people to attend the OB Town Council debate on Wednesday night.

Susan welcomed and introduced Michelle Hagan, candidate for Superior Court Judge Number 25. She directed the audience to her website www.haganforjudge.com. Michelle Hagan was endorsed by the club, unanimously.

Susan welcomed and introduced Dr. Mike McQuary, candidate for San Diego School District C (Coastal). He will be visiting each of the district schools to engage persons in a dialogue on education. He encouraged attendees to attend his kick-off event (drmike4schools.com). Dr. Mike McQuary was endorsed by the club, unanimously.

Guest Speakers on the Topic of “Barrio Logan: Community or Industry, Who Decides in Our Democracy?”
   Mr. Will Moore (immediate past counsel to the County Democratic Party) moderated this month’s main program, which focused on the Barrio Logan Community Plan, which will be on the ballot this June, and included presentations from the following two individuals:

Georgette Gomez, EHC
EHC is dedicated to achieving environmental and social justice. They believe that justice is accomplished by empowered communities acting together to make social change. They organize and advocate to protect public health and the environment threatened by toxic pollution. EHC supports broad efforts that create a just society and that foster a healthy and sustainable quality of life.

Bruce Coons, SOHO
Through education, advocacy, and stewardship SOHO’s mission is to preserve, promote and support preservation of the architectural, cultural and historical links and landmarks that contribute to the community identity, depth and character of our region.

As one member commented after the meeting:

I thought the presentation was very relevant. The point was stressed that every community action plan would be at risk if Barrio Logan succumbs. Even if all the residents and City Council approve, millions of dollars could be down the drain. Any community plan could be invalidated. We all now know to vote yes on B and C!

Reports
Treasurer’s Report – Barbara Houlton
Barbara was absent but Susan reported that we had 3 renewals and 3 new members.

Events Committee – Mike Johnson
Mike announced the club will have a booth at the OB Street Fair on June 28th and he requested volunteers to sign up for two hour shifts to help run the booth. Enter your details here if you’re interested in signing up, or call Mike (619) 991-0105

President’s Report – Susan Peinado
  Susan announced the passing of club member Robert Devries and comments were made memorializing his long-time contributions to civic engagement. A moment of silence followed.

Susan announced the club will be honored at the Roosevelt Dinner on April 5th as the San Diego County Democratic Club of the Year.

Grassroots Organizing (GO) Team Liaison – Nancy Witt
Nancy provided an overview of the GO Team wherein volunteers go to Democrats and decline-to-states with a list of all endorsed candidates and initiatives. Training sessions are coming up.

Upcoming Events and Announcements
Club member John Hartley updated the audience on the Neighborhoods for Clean Elections Campaign. Their goal is to put a clean election initiative on the ballot in 2016. He showed a brief clip of Bill Moyers movie on clean elections.

Events and announcements were made:

Election b allots will be mailed out on May 5th for the June 3rd election.

Join us virtually this Sunday to learn more about immigration policy with Gerry Wasson and Andrew Nietor from the American Immigration Lawyers Association. Registration link in bio!
Today club members at @womensmarch_sd marched in solidarity with women in Texas and around the country whose rights are being restricted ❌🐘#womensmarch
Sunday July 25, 4PM
Representative Scott Peters is the only Democrat in San Diego County’s Congressional Delegation who opposes Medicare for All. Join us in calling on Rep. Peters to take the Patients Over Profits pledge. Link in bio!
May meeting this Sunday with special guest Assemblymember Chris Ward PLUS resolutions on Medicare for All and Abolishing Corporate Personhood. Share what you think! See you then!
The Point Loma/OB Democratic Club stands in solidarity with our Asian-Asian Pacific Islander friends, neighbors and community members in San Diego and across the country who are experiencing or fear acts of racist aggression and violence.