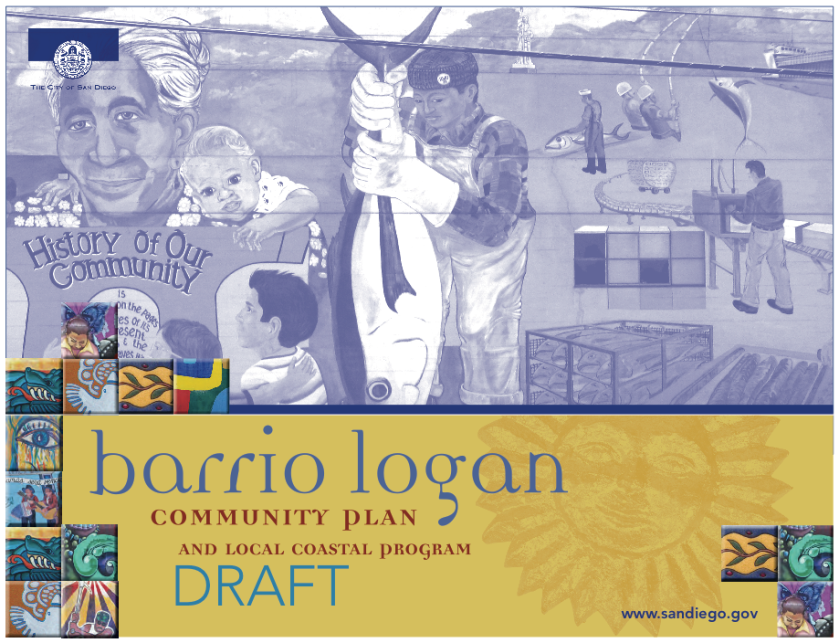 This month’s main program is about the Barrio Logan Community Plan, which will be on the ballot this June (mail ballots will arrive at the start of May).

Many years of discussion came to a head last year just before the Mayoral special election. David Alvarez had been closely involved as the representative for the district, and as a first-hand sufferer of pollution generated in the area. Kevin Faulconer sided against the rule of representative democracy and with the lobbying power of big business who collected signatures (possibly illegally) to place an overturn of the plan’s adoption on this summer’s ballot. The issue was used (and abused) in Mayoral campaign literature, local reports discredited the actions of ballot signature gatherers, and the UNION-t predictably sided against people and with corporations (while blaming Democrats).

There are always (at least) two sides to every story (see this Voice of San Diego article by Andrew Keats) so we were delighted when the club was contacted by Cynthia Ibarra of the lobbying group Protect Our Jobs Coalition, to present the industries’ side. We reached out to supporters of community planning, including our own club member Bruce Coons, and Georgette Gomez an Environmental Policy Advisor for the Environmental Health Coalition (EHC). 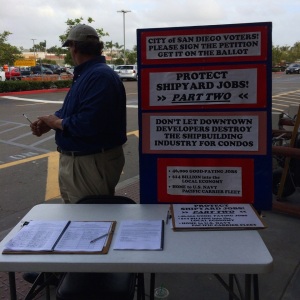 Signature gatherer outside Home Depot who turned his back on our photographer when asked if we could take his picture. 11/15/13.

When we informed the lobbyist organization that we were planning the event as a discussion with other parties, suddenly their spokespeople were no longer available to attend. We offered to read their statement, or reschedule, but they made it clear they would not be able to accommodate an informed discussion, only a one-way presentation. We did not think that was acceptable.

Even without the involvement of the ‘Coalition’ we feel the Barrio Logan plan is worth a deeper discussion, intrinsically and for the lessons it can teach us with the OB Community Plan coming up for approval in the next few months.

For the last few years we have heard a lot of talk of empowering neighborhoods and investing in our communities. How does this work, in practice?

How can we organize to make sure that City Hall listens to our concerns, and not just to those of powerful, monied corporations?

Georgette Gomez, EHC
EHC is dedicated to achieving environmental and social justice. They believe that justice is accomplished by empowered communities acting together to make social change. They organize and advocate to protect public health and the environment threatened by toxic pollution. EHC supports broad efforts that create a just society and that foster a healthy and sustainable quality of life.

Bruce Coons, SOHO
Through education, advocacy, and stewardship SOHO’s mission is to preserve, promote and support preservation of the architectural, cultural and historical links and landmarks that contribute to the community identity, depth and character of our region.

Nancy Witt, GO Team
Nancy will update us on training and events planned for the elections this summer.

John Hartley, Neighborhoods for Clean Elections
John will bring us up to date on the progress and continued work needed to make our election process answerable to people and not distorted by monied interests. Video about Clean Elections available here.

Social Time Members are encouraged to get together from 3:30pm before the meeting starts, please bring whatever light drinks/snacks that you’d like to share. After the meeting ends everyone is invited to adjourn to locally-owned nearby venues to continue progressive conversations.

As the Point Break Cafe outside deck is getting a bit chilly of an evening we’ve changed our regular post-meeting venues to The Wine Pub 2907 Shelter Island Dr, that has an outside patio with a fire pit (and parking in the Union Bank parking lot behind the pub).

Join us virtually this Sunday to learn more about immigration policy with Gerry Wasson and Andrew Nietor from the American Immigration Lawyers Association. Registration link in bio!
Today club members at @womensmarch_sd marched in solidarity with women in Texas and around the country whose rights are being restricted ❌🐘#womensmarch
Sunday July 25, 4PM
Representative Scott Peters is the only Democrat in San Diego County’s Congressional Delegation who opposes Medicare for All. Join us in calling on Rep. Peters to take the Patients Over Profits pledge. Link in bio!
May meeting this Sunday with special guest Assemblymember Chris Ward PLUS resolutions on Medicare for All and Abolishing Corporate Personhood. Share what you think! See you then!
The Point Loma/OB Democratic Club stands in solidarity with our Asian-Asian Pacific Islander friends, neighbors and community members in San Diego and across the country who are experiencing or fear acts of racist aggression and violence.