Monday, March 24
6:00 PM
In Land of Cowboys / En Tierra de Vaqueros
Joan B. Kroc Institute for Peace & Justice Theatre
Oliver Rendón, Director / 32 min.
View Trailer
Some wear Stetson hats, jeans, and plaid or long-sleeved shirts. Although they fit the image of the macho cowboy, the rugged appearance of these gays and lesbians of Sonora, Mexico does not tell the whole story of their lives. Intolerant, conservative Catholic values and traditional family bonds provide a complicated and changing dynamic. RSVP

6:40 p.m.
Die Standing Up / Morir de Pie
Joan B. Kroc Institute for Peace & Justice Theatre
Jacaranda Correa, Director / 90 min.
View Trailer
This is the inspiring story of Irina Layewska, a tireless fighter in the war for personal freedoms, who continues to work for progressive causes from her wheelchair despite a severe disability. But it’s also the love story of Irina and her partner Nelida, whom she married as a man. Irina was born into a male body; she grew up idolizing Che Guevara and spent much of her young life fighting in the Cuban solidarity movement. When her condition suddenly threatened her eyesight she became aware of an internal, emotional imbalance, and a need to explore her feminine side, and in the end made the choice to become a woman. RSVP

Tuesday, March 25
5:00 p.m.
I Want to See / Quiero Ver
Joan B. Kroc Institute for Peace & Justice Theatre
Adele Horne, Director / 6 min
On the 13th of each month, hundreds of people gather at a site in the Mojave Desert to see visions of the Virgin Mary appear in the sun. They point Polaroid, cell phone, and video cameras at the sun, and compare interpretations of the resulting images. This film documents the creative energy of this populist spiritual event. Vision Award, Ann Arbor Film Festival. RSVP

Skin Destination
Joan B. Kroc Institute for Peace & Justice Theatre
Adriana Trujillo, Director / 10 mins.
View Trailer
Skin Destination proposes a reflection to the state of emergency that Mexico lives from the perspective of the body as an agent. Using found footage film in Skin Destination elapses in a cross-border manner (as well as in the city of Tijuana) different formats, narrative strategies and staging. RSVP

Wednesday, March 26
4:00 p.m.
Keep Your Eyes On Guatemala / Tengan Puestos los Ojos en Guatemala
Joan B. Kroc Institute for Peace & Justice Theatre
Gabriela Martínez, Director / 54 min.
View Trailer
This film tells the story of Guatemala’s National Police Historical Archive (Archivo Histórico de la Policia Nacional or AHPN) intertwined with narratives of past human rights abuses, and the dramatic effects they had on specific individuals and the nation as a whole. In addition, it highlights present-day efforts to preserve collective memories and bring justice and reconciliation to the country. RSVP

Co-sponsored by the University of San Diego Enhanced Student-Faculty Information Fund, the Department of Languages and Literatures, the International Studies Center and the Latin American Studies Program.

6:00 p.m.
Coronation / Coronación
Joan B. Kroc Institute for Peace & Justice Theatre
Ana Andrade, Bryan Chillian, Jesus Guerra, Directors / 7:51 min.
Memin, an inhabitant of the river channel “El Bordo” in Tijuana, Baja California recounts and exposes migrants concerns about violations by the authorities. On 24 November 2013, there was an attempt of a massive illegal border crossing, the real experience was captured on tape. The footage of the crossing is joint together with a game of chess, as Memin describes the complex context of migration and marginalization. RSVP

6:15 p.m.
La Camioneta: The Journey of One American School Bus / La Camioneta: El Viaje de un Autobús Americano
Joan B. Kroc Institute for Peace & Justice Theatre
Mark Kendall, Director / 72 min.
View Trailer
Every day dozens of retired school buses, migrate from the US to Guatemala where they transport people to work every day. In Guatemala since 2006 nearly 1,000 drivers have been killed for not paying extortion demanded by local gangs. THE TRUCK follows a bus in its transformative journey: a journey between North and South, between life and death. RSVP

5:40 p.m.
I’m Just Like You / Me Parezco Tanto a Ti
Warren Auditorium, Mother Rosalie Hill Hall
Luna Marán, Director / 23 min.
Three grandmothers and three youngsters in the North mountains of Oaxaca, tell us which were and what their deepest aspirations. “I’m Just Like You” portrays the passage of three generations of women through dreams and opportunities of the past, present and future. RSVP

5:00 p.m.
Traces
Warren Auditorium, Mother Rosalie Hill Hall
Fiamma Montezemolo, Director / 20 mins.
In this video essay contemplative images, confessions, theoretical reflections and an enigmatic subject of electronic music are fused to form a meditation on border life between the US and Mexico. Based on years of ethnographic work in Tijuana and ascetic 24-hour schedule, artist and anthropologist refracts his own experience in the region to try to carve out a living and textured portrait of the wall separating Tijuana and San Diego. These are images of a rusty wall, topography rebel surveillance structures decaying, furtive moments of undocumented migrants crossing dystopic landscapes. RSVP

Humedales Artificiales: Three Transnational Wetlands
Warren Auditorium, Mother Rosalie Hill Hall
Cynthia Hooper, Director / 5 min
This observational documentary examines three anthropogenic wetlands in the delta of the Colorado River in Baja California. These artificially created Mexican sites (sometimes accidentally) have been deeply impacted by the activities and policies of the United States. A wetland is facing an immediate threat of destruction due to the activities of the United States, while another requires complex bilateral agreements between the two countries in order to be preserved. The third wetland which holds the waste water of the city of Mexicali, Baja California, enjoys a reasonably secure future. All these habitats manufactured circumspection and humility inspired by his precarious fragility and awe and respect for their great resilience. RSVP

Border Film Week is produced in partnership with POLEN and Non.Format. 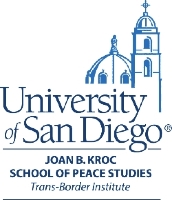