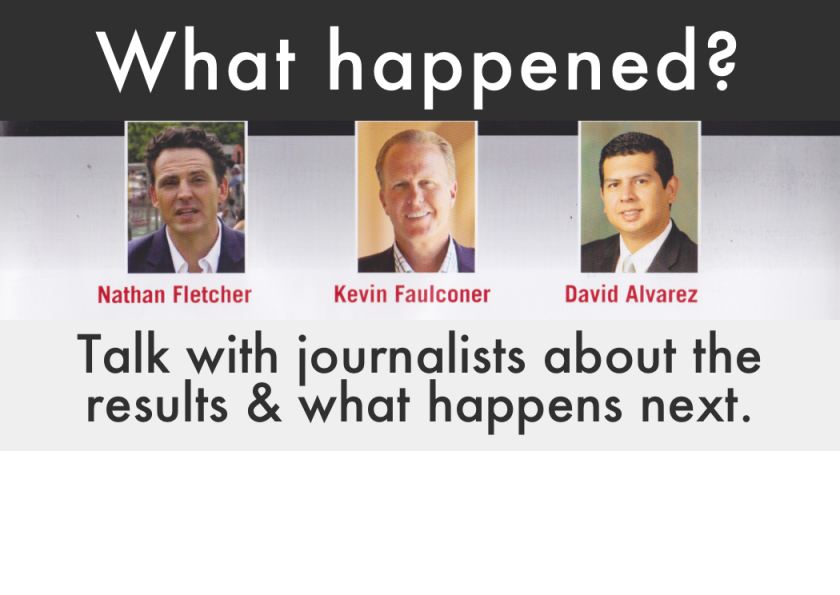 Susan Peinado called the meeting to order at 4:00pm and welcomed and introduced Sarah Boot, candidate for City Council District 2. Then she handed over to Patrick Schultheis to introduce the panel of journalists who are covering the Mayoral Special Election.

The panel discussion covered the results of the Primary and speculation on the run up to the run off with an open format, and multiple questions from the audience.

The discussion covered
– Results of the Primary (polls, changes)
– Campaign strategies and styles
– Role of ‘independent’ PACs, negative ads
– Where do we go from here? Predictions

(Slides used at the discussion can be downloaded here.)

Club member Judi Curry wrote a comprehensive review of the meeting for the OB Rag, here are some bullet points from the discussion –

Andy Cohen
San Diego Free Press
– Nathan says he knew the timing was wrong
– Flood of negative ads was a deciding factor to shore up distrust of Nathan
– Regarding the charge of Alavarez broken promise – this was an unanticipated election in very unusual circumstance, and David will be more powerful for his district and community as a strong Mayor
– Kevin Faulconer is not a real leader – he waits to determine where wind is blowing
@AndyCohenSD

Wendy Fry
NBC 7 I-team
– Wasn’t surprised David beat Nathan, he had a better (ground) campaign
– We’ll see if Nathan is truly a Democrat if he helps get David elected – actions speak louder than words
– It’s a misstep to underestimate David Alvarez
– Winning strategy for Kevin Faulconer is low voter turnout
– Kevin Faulconer negotiated away Firefighters death and disability benefits – broken promise may harm him
– Too early to predict the outcome for the run-off
@WendyNBCSD

Daniel H. Muñoz
La Prensa San Diego
– Surprised that a Latino candidate won against Nathan
– Endorsed Mike Aguire not because he thought he would win but because David had promised to run 2 terms in his district and not move on as Mayor – to provide much needed continuity (see Andy Cohen’s rebuttal of this point above)
– This election is not just about neighborhood issues – need to talk about pension costs, water costs, sewage and other important issues
– Kevin Faulconer is Carl Demaio lite
– Real question – who is Jacobs going to support?
@LaPrensaSD

Dr John Warren
The San Diego Voice and Viewpoint
Dr. John Warren
– David connected with voters better, having grown up here
– David also received unintended help from Todd Gloria
– Gloria demonstrated leadership and success regardless of his youth
– Nathan’s campaign was like a basic stump speech and he was not as accessible as David
– This race boiled down to business versus labor (not David vs Kevin Faulconer)
– Community can make a difference in this election, if awoken

Nancy Witt called for all Democrats to put their Primary choices behind them and to unite behind David – she is our liaison to the San Diego County Democratic Party Grassroots Organizing Team and encouraged us to contact her to help walk and make phone calls, to get Dems to the polls in February. Turn out will matter very much in the outcome of the Special Election.

President’s Report
Susan introduced Sarah Boot who thanked everyone for the club’s endorsement and mentioned two upcoming fundraising events as well as participating in the OB and PB parades.

Treasurer’s Report
Ruth Rollins reported on the solid finances of the club, and that the club recently approved to purchase PA system components for about $200.
Ruth made a motion that we make donations to our candidates, and that $600 be donated to the SDCDP for the upcoming elections.
Susan seconded the motion, and the motion was passed without opposition.
Ruth announced that we had surpassed our membership goal for the year with 121 members, an increase of over 25%.

Old Business
Gloria Johnson’s celebration of life service – some pictures are posted on the club website.
December 7: 4:30pm OB Holiday Parade updates, need participants and workers: David Alvarez does not have a separate entry and we hope that he will join us in the parade.
(Alvarez campaign: Steven and Jason were present at the meeting and acknowledged and congratulated.)
December 8: Holiday Party at Ruth’s. 3:30pm check in begins: Bring toys for children of Western Service Workers.
New Treasurer for 2014: Barbara Houlton is running next year.

New Business
Club donations to the SDCDP for candidates ($600 donated to the SDCDP for the upcoming elections).
Mike Johnson volunteered to serve as the club’s liaison to the Alvarez campaign.

Adjournment
The meeting was adjourned at 5:31 pm and several members retired to the Wine Bar on Shelter Dr to continue amicable discussions. 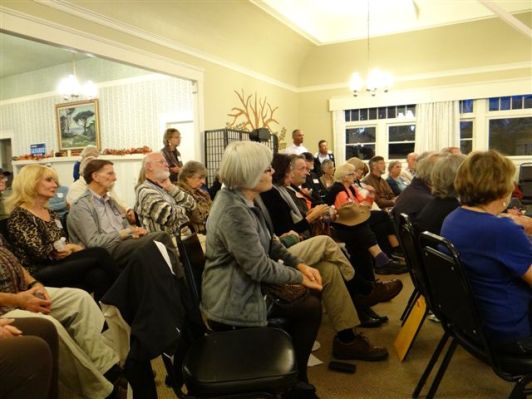 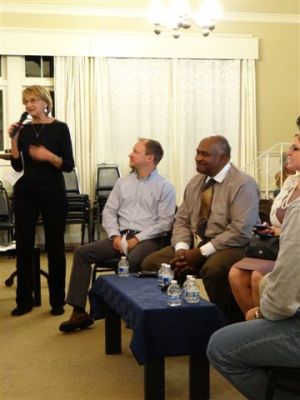 Thanks to Dave Fisher for these six photos, and to Gretchen Newsom for the top photo.