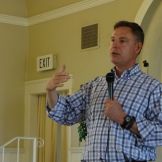 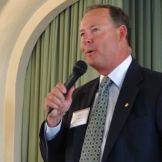 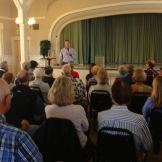 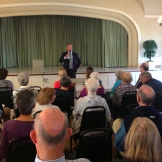 Susan keeping the meeting on schedule

Scott Peters updated the club on his work in congress, trying to deal with unreasonable tea-party Republicans as well as reasonable GOP members. He answered members questions and praised club members for their efforts in bringing awareness to Democratic Party causes.

Ed Harris announced his candidacy for District 2. Ed spoke to the club in February, 2013 about Lifeguards, Beaches and Politics.

Cindy Marten gave a superb overview of her career to date, and how she intends to fill the role of Superintendent for the San Diego Unified School District. Everyone was impressed by her breadth of knowledge and clear articulation of complex issues, as well as her warmth and pragmatism. She explained that each school faces different challenges and by way of example recounted how she had worked to provide employee day care at one, and a healthcare center for children at another. Supported by the School District Board (unanimously), the unions, principals and a Mayor who understands educational issues well, Cindy will be a great Superintendent. She answered members questions at length, and in detail. Gloria Johnson asked her about providing support for LGBT children. As well as educating herself on the issues, she will provide funding, resources and training of teachers to support LGBT children and protect them from bullying, and stand with them at the parade! She tries to live up to Central Elementary motto that she was asked to repeat – Work Hard. Be Kind. Dream Big! No Excuses.

Kevin Beiser sought the club’s early endorsement for the San Diego Unified School District Board, he is up for reelection in 2014. The motion was passed unanimously.

Some of the club members who attended the Democratic State Convention gave reports on their experiences and the resolutions that were passed – Gail Mackler, Michael McQuary, Gerry Senda, Ruth Rollins and Susan Peinado. You can view details of the Party Office Elections, Rules and Resolutions that were adopted from the California Democratic Party website.

There were 64 members and guests in attendance, including 6 new members!