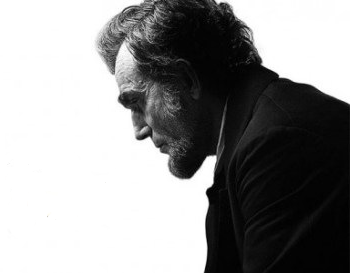 The screenplay was written by Tony Kushner and was based on the book, A Team of Rivals, by Doris Kearns Goodwin. It took six years to write and film, two years longer than the Civil War itself.

The Thanksgiving weekend shows, such as Meet the Press, Up with Chris Hayes and MSNBC Weekends with Alex Witt all featured interviews and discussions about this movie. Apparently, everyone in punditocracy immediately flocked to see this movie. And everyone agrees that Daniel Day-Lewis has nailed Lincoln for all time, even Doris Kearns Goodwin. In the interview with Alex Witt, Goodwin said she felt as if Lincoln were “back again.” When I saw the movie, I never felt as if I were watching an actor, but actually Lincoln, so I understood what she was expressing. During the interview, she explained that the movie stays true to history and is as rooted in history as possible, from the wall paper and carpeting in the White House, to the books on the shelves.

The focus of the film is the last four months of Lincoln’s life, and the legislative battle to pass through the House of Representatives, the 13th Amendment to the U.S. Constitution, ending slavery.  Chris Hayes described this story as “…what is the most elevated and the most corrupt in democratic politics and the inescapable logic of compromise.” Mr. Hayes went on to say that this movie is the greatest sustained, artistic mediation on these two themes (1. the elevated versus the corrupt and 2. the logic of compromise) in the context of American politics that he has ever seen, one with interesting similarities to our current situation. Goodwin expressed, during her interview with Witt, that our current leaders could learn from Lincoln and his ability to work with his rivals to achieve the greater good.

On Meet the Press, Ken Burns, whose new movie, The Central Park Five, explores racial issues, expressed that we are still dealing with our original sin of slavery. The horrible, grand bargain made explicit during the film was the concession by the great abolitionist, Thaddeus Stevens (played by Tommy Lee Jones) of Pennsylvania, that all persons are equal in the eyes of the law, not that all persons are equal.

The practicality of the situation demanded that slavery be prohibited first, before equality could be addressed. Al Sharpton stated on Meet the Press that this was the most striking part of the film for him, this necessity for the purist to back down in order to get things done, to create the greater good. During the Meet the Press discussion, it was noted by David Brooks that compromise can stain your soul and that a great leader, such as Lincoln, realizes that he must take on the sins of the country to achieve what is needed for this greater good.

In David Brooks’ New York Times column of November 22, Why We Love Politics, he sums up what the story of the film meant to him:

“…you can do more good in politics than in any other sphere. You can end slavery, open opportunity and fight poverty. But you can achieve these things only if you are willing to stain your own character in order to serve others — if you are willing to bamboozle, trim, compromise and be slippery and hypocritical..Politics doesn’t produce many Lincolns, but it does produce some impressive people, and sometimes, great results. Take a few hours from the mall. See the movie.”

I agree. Go see it. Besides, it’s going to be all that we talk about for the next month. You’re going to be lost if you don’t.
Susan Peinado

For a view of the movie Lincoln, from a Black perspective, this article is very interesting