People on the Obama bus to Las Vegas from San Diego

When the following email, from Jennifer Douglas, Save KLSD, arrived the Tuesday before the election, I read and dismissed it:

But then I started to become anxious, listening to reports of Romney’s increasingly positive poll numbers. I weighed which campaign was more important – Filner’s or Obama’s. That night I had nightmares of a President Romney.

As my anxiety mounted, I realized I had unconsciously made my decision and the next morning, I emailed Jen that I was onboard. By the next day, the bus had been filled and had a waiting list.

I’ve never done anything like this before -get on a bus with strangers (except Mike Johnson, whom I had briefly met at our last Sunday meeting), walking around a city I did not know. It was unclear what to expect.

The scene upon arrival at the Carpenters Union Building in Mira Mesa was a wee chaotic. I was instructed to find a roommate, and then get on the bus. My tentatively assigned roommate, an older woman, brushed me off. Umm, later it became obvious that had been a stroke of good luck.

I approached a cheerful woman and she immediately said “yes.” I know how men must have felt in the “olden” days when they had to do the “asking.” Anyway, this was the best decision I made while on the trip. Aileen was a blast, funny and easy to get along with.

The bus was comfortable, with electrical plugs at some seats for charging gadgets. We stopped in Barstow at the Flying J for 30 minutes. Denny’s has takeout, which is still awful. We saw Chipotle too late. Taking our unhealthy dinners back to the bus, we left the Flying J and Barstow behind and around 10 arrived at the Stratosphere in LV.

Gathering in the lobby, we were handed our room assignments. The rooms turned out to be surprisingly large and comfortable. Aileen and I freshened up and met Jen and some of our new friends in the bar at the Top of the World. 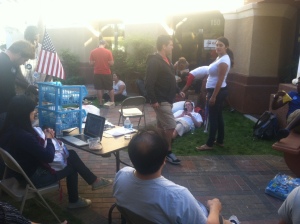 Volunteers waiting to be fed

We met back in the lobby at 8 AM Saturday morning. Around 8:45, we got back on the bus and were taken to the Obama headquarters where breakfast and coffee were to be waiting. Alas, we waited around until 10 AM for bagels and hot coffee. This was frustrating and it made us late to start with our walking.

We were paired up, given a script, a list of houses in a specific area to contact, a clipboard and door hangers, then loaded into a van and dropped off. Our driver, Dave, was the best of all the organizers and group leaders. He is a medical student and was totally unflappable. We kept in touch with Dave by texting on our cell phones. 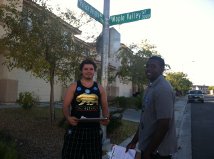 On this first shift, my partner was Monteil, a really tall, young African-American. He was just 20 years old, a former football player on the Lincoln High team and is going into the Navy soon. He had never knocked on doors, just worked at phone banks, so we stayed together, alternating who would do the approach. We joked about him not wearing a hoodie, but I felt he was somewhat safer if he stayed with me. He had come with his buddy Emilio.

In our van, besides Monteil, and Emilio, were a Chinese graduate student from UCSD, Kevin (from San Diego), Aileen, me, Heidi (born in Iran) and three German students from San Diego State, who couldn’t vote, but were totally into the issues of the campaign.

We returned to the Headquarters to find a boxed lunch. After lunch, we loaded up the vans again and did another shift in another area of town. Only one young black woman slammed the door on me, screaming that I had no right to be ringing her doorbell. She may have been canvassed one too many times.

We returned around 6 to a slightly cold pizza dinner. Some of us went back out for a third shift; others went upstairs and attempted to input data from the day’s contacts.

After returning to the hotel, there was a party arranged by younger volunteers, in one of the rooms near ours. I left it soon after the security guard showed up. Many of them went to the Strip but others went to sleep (me). Some of us had a really hard time getting up and to the bus the next morning. We had to wait for some and did not leave until 9:25, which of course didn’t sit well with the older generation.

This is where I think that the organizers excelled, because they were able to walk that fine line between the young and the more mature volunteers. Most of our leaders were in their thirties and illustrate to me something that I once read; that America has the most immature 20 something’s on the face of the earth, but the most mature and capable thirty year-olds of anywhere, and where they come from is a great mystery. 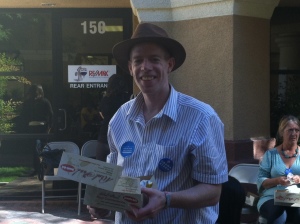 Seriously, all the kids were impressive, a gallimaufry of the real America – with tattoos and multiple piercings, carrying every kind of digital devise possible. I will include here one young man on vacation from London. Matt had worked in Florida the first week of his vacation and then he came to Las Vegas to volunteer. The day after the election, he was slated to return to London and his job.

The older volunteers were not always on their best behavior. There was griping about waiting around, the food situation (one very vocal older vegetarian), and earned reputations for being difficult.

The most valuable skills that I brought with me were the abilities to be flexible and entertain myself. Good feet and conditioning were almost secondary.

Our shift on Sunday was in a dicey area, but amazingly, strongly for Obama. Pit bull-ridden houses, surrounded by 15-foot metal fences with barren yards, older dudes sporting stringy, long grey hair, tied back in ponytails, toothless, wearing wife-beater tee-shirts, Hispanic (I got to use my Spanish) grandfathers watching grandkids, Filipinos, young and old people, all expressed a great desire to see Obama reelected. Before each shift, I made sure that my hat and purse strap were filled with Obama pins. Postal carriers, kids on the street, people in the casino and people in the houses would beg me for them. So I had a feeling that Obama would carry Nevada.

On Tuesday night, I met some of my new friends at the Westin for the watch party. As the room filled with people, I started to recognize many of them. My new friends introduced me to their friends. I saw women I know from WOSD, and know for a fact are not Democrats, but Greens, Anti Nuclear, Clean Government, on and on, who had worked hard to get Democratic candidates elected. We all partied, cried and cheered together. 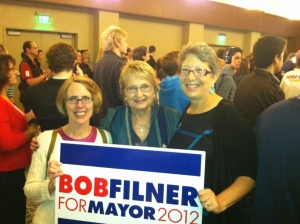 Three dangerous women at the Westin

What really struck me, besides the feeling of having taken part in history, is that strong coalitions, not just from this bus trip, but from Occupy, also, have been formed.

I think that this is the yet untold, and unrecognized, story coming out of this election; that activists have met, formed friendships, learned to trust each other and work together around common goals.

This dynamic will be needed to keep pressure on elected officials, but we now have contacts, friends and support for each other’s causes that we did not have before. Watch out, this is going to be dangerous to the establishment.